In 2022 Denmark hosts the first three stages of Tour de France, the world's biggest bicycle race. The bicycle field and millions of TV viewers from around the world will be passing by locations where COWI and our customers have left our marks on infrastructure, buildings and urban development.

In this article, we are zooming in on some of COWI's favourite landmarks. 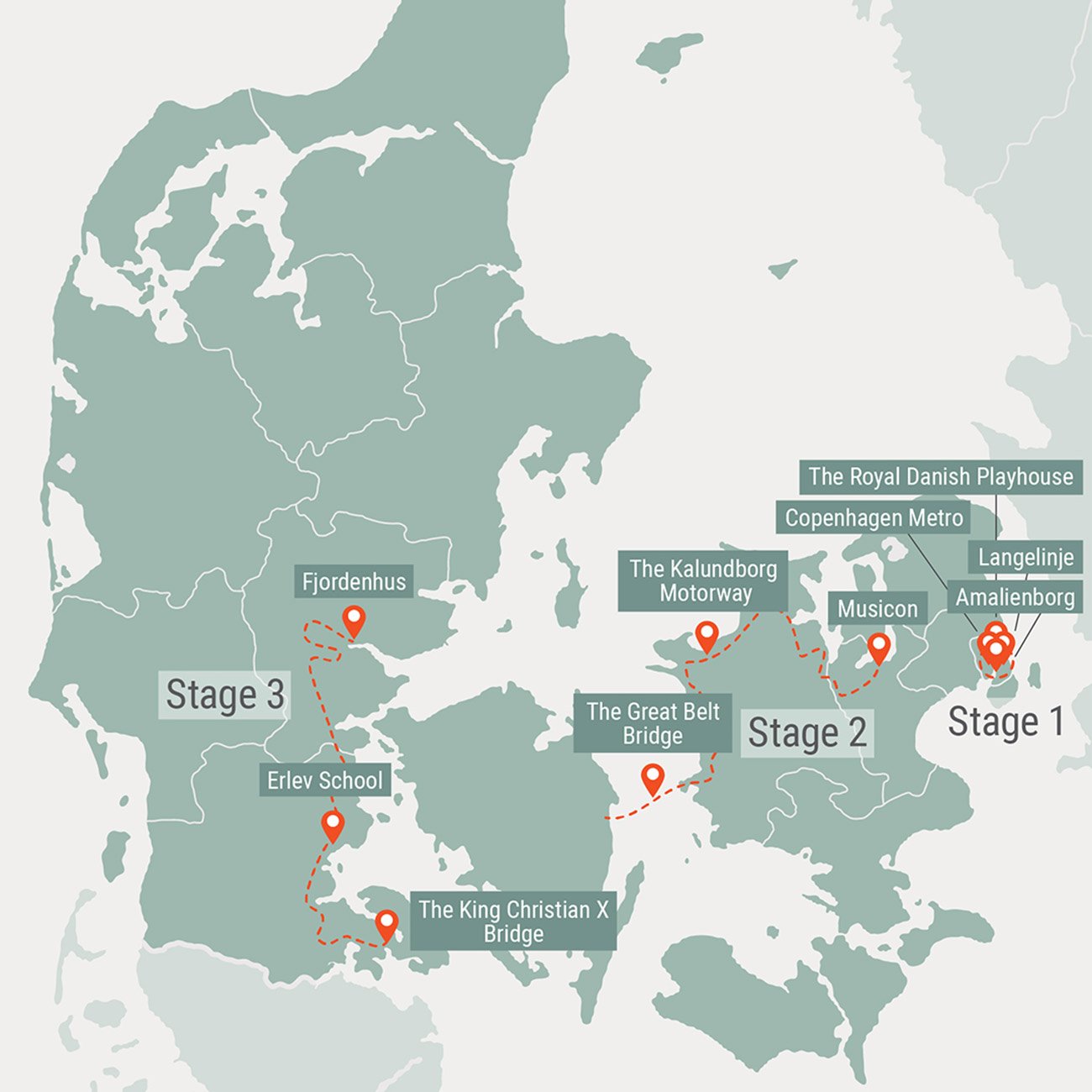 The first stage will see the riders on a 13-kilometre time trial through Copenhagen, the best bicycle city in the world. They will pass by iconic landmarks such as the Little Mermaid and Amalienborg Palace, and take the world's most busy bicycle path, Queen Louise's Bridge, which 40,000 cyclists cross every day.

around the city on wheels

The Tour de France riders are expected to complete the 13 kilometres in Copenhagen in less than 20 minutes. However, even though many Copenhageners love their bicycle and travel a distance that is equivalent to 330 Tour de France races or 1,390,000 km on a daily basis, many people also choose the metro when travelling through the city.

The Copenhagen Metro has run since 2002, and COWI managed the overall design of almost 39 of the metro stations and the 36 km underground tunnels and tracks. In connection with the construction of the underground city ring, 3.1 million tons of waste was removed.

Below the historical city centre, technical challenges arose, related to shallow tunnelling under old buildings. To prevent damages, the buildings were monitored by sensors, and, in some cases, COWI established a system with pipes under the construction, which made it possible to lift up the buildings.

COWI also developed strategies for the groundwater control work, which made it possible to construct the metro without a large-scale lowering of the groundwater which would have been critical to the Copenhagen historic city centre.

Last year, more than 73 million passengers used the Copenhagen Metro which has twice been awarded the world's best metro.  The open squares around most metro stations are designed for urban life and for parking bicycles, of course!

The Tour de France is the ultimate sports drama, and the riders will also pass by the stronghold of big dramas, The Royal Danish Playhouse (Skuespilhuset). The Royal Danish Playhouse was constructed as part of the EU Eco-Culture project and has been designed with several energy-conserving functions which reduce the carbon emission from operation of the buildings by more than 50%.

The proximity to the water means that the energy consumption for cooling can be reduced by 75% and the heating by 35% as the seawater heat pump ventilate the entire building and regenerate the heat that is generated from the audience and the lights.

The location close the Copenhagen waterfront also means that the house has been secured against collision of ships. As is the case with most other cultural buildings, the Royal Danish Playhouse is expected to last for many generations, and that is why the facade of the building is covered with hard burned stones, with a life expectancy of around 300 years.

In 2010, a section of the royal castle, the Frederik VIII palace at Amalienborg, was renovated. Arkitema was the architect behind this renovation which transformed the historic palace into a modern living- and workspace and integrated the historic building in contemporary functions.

The building has previously been used for servicemen in the Danish navy, and this gave some challenges as extra floors were inserted in the building. Some floors are still there, which makes the palace's banquet hall a little lower than in the other three palaces.

on a cruise in copenhagen

Copenhagen is a popular hot spot for tourists from all over the world, and the many visitors bring life to the city. However, the big cruise ships that moor to the quay near the city centre are heavy polluters, with a energy consumption corresponding to an entire provincial town!

COWI has done some calculations on the economic and environmental effects of offering shore-side electricity instead of diesel for the ships when they moor to the quay and it shows that onshore power plants for ships at berth will be vital in reducing GHG emissions and cut air pollution.

Around 50% of the cruise ships that sail on the Baltic Sea have already refitted their ships to be able to be powered with renewable electricity from shore.

The second Danish tour stage starts in Roskilde, which is one of the oldest cities in Denmark, founded by Harald Bluetooth and home to Vikings and bishop chairs. Nowadays, the city is also known for its large music festival which can celebrate its 50th anniversary this year. On that occasion, Roskilde will accommodate 130,000 extra citizens at the Animal Showgrounds (Dyreskuepladsen) concurrently with the cycling race.

In fact, music is a big part of the city, and COWI has taken part in transferring a former industry area into Musicon, a new and creative quarter. Here, you will find a mix of housing, culture, education and start-ups. Rabalderparken is one of the many creative areas in the quarter where a former gravel pit and dump side have been converted into a recreational playground and torrential rainstorm park.

The polluted soil has been encased to make room for hills and lakes which means that the area is now an attractive playground and skatepark. The area has also been expanded to handle large amounts of stormwater which is then collected, rinsed and discharged into the Musicon ductwork.

Apart from the park, COWI is also the consultant for several other private operators who take part in turning Musicon and the former dump site into an attractive and creative area. These projects include the flexible design of the technical university in Roskilde and the Generations' house (Generationernes hus) which is a mix of various types of residents, such as sheltered housing units for elderly, family residents and halls of residence.

The score sprint of the day takes place on the way to Kalundborg which is located in western Zealand. The highway, on which the riders will be racing towards the town, will be converted into a motorway up and until 2028.

COWI is the full-service consultant on the assignment and. as one of the first activities in relation to the planning, we will carry out field studies of the plant life and animal life in the area and survey several other environmental conditions in order to show consideration for the neighbours and the neighbouring environment during the construction phase. In connection with the expansion of the highway, noise screens will be established in certain areas, and the animals will have new fauna passages underneath and above the highway.

The possibility of encouraging the use of sustainable solutions will also be taken into consideration, such as recycling of materials in the road to minimise the environmental impact and climate footprint in the area. The motorway will connect Copenhagen and Kalundborg and will play an important role, if a bridge to Aarhus eventually becomes a reality.

The challenging climax on today's tour will undoubtedly be the crossing of the Great Belt Bridge (Storebæltsbroen). This suspension bridge, across the Great Belt, is one of the world's longest bridges, having a free main span longer than one US mile (1624 m), and it is definitely one of the most prominent COWI fingerprints on the Danish landscape.

The bridge crosses open waters which are frequently swept by rather strong westerly winds which occasionally stop even heavier traffic from crossing the bridge. During the ascend to a level of 70 metres above the waters, the Tour de France riders will be exposed to winds steadily increasing by 50%, more than encountered on the road leading up to the bridge. When entering the main span of the bridge, the riders will meet another challenge when passing the 254-metre-tall towers which carry the suspension cables and roadway.

The towers have a profound influence on the wind, creating swirls which locally increase and decrease the otherwise steady wind. Motorists crossing the bridge on windy days frequently feel the influence of the towers as a jilt to the steering wheel while the swirling winds sometimes even blow over light high sided vehicles.

As climate changes are posing a great risk to costal infrastructure, COWI is doing an assessment of the impact of climate change on the ramps to the Great Belt tunnel, the costal defences and tunnel itself. COWI’s analyses show that the dikes on Sprogø and Halsskov will have to be gradually raised in the long term if the original design and safety criteria are to be maintained.

The third stage starts in Vejle Harbour, in front of the new symbol of the city, Fjordenhus. The artist, Olafur Elisasson, is the designer of this iconic building, founded on piles placed in the harbour. Four connecting cylinders constitute the interior space and a footbridge and a tunnel leads down to the ground.

With the placement of the building in the water, the artist deliberately wanted to give the building the look of a medieval castle. However, the building is actually made of 7,500 cubic metres of concrete, including a facing wall. 1 million bricks were purchased for the facades and every single brick has been placed according to a specific pattern. Tile bricks give the impression that renovations have been made after the castle has been part of a battle. As the building is placed in the docks, it has been secured against ship collision and effects from the seawater.

During the construction, 26 metres of sheet piling were put up to keep the water away from the excavation, since the groundwater level had to be lowered by 7 metres in comparison to the normal groundwater level in Vejle Fjord. A slab of 1,400 m² was casted to contain the graving piece and create a ground for the ongoing construction work.

Fjordenhus consists of offices and a ground floor which is accessible to the public, including a Michelin restaurant and an exhibition space.

a future school made of timber

A great party has been prepared in Haderslev for when the Tour de France passes the newest symbol of the city on Saturday. One of the newest symbols of the city is Erlev school which is worth a visit. The entire school is made of timber and consists of more than 193 columns of laminated wood and 445 laminated wood beams, which, altogether, weigh 269,2 tons and have a total length of 3.38 km. Last year, Erlev school was awarded "the school building of the year 2021", among other things because of the reinterpretation of the learning environment and the high score in terms of sustainability in relation to the social, economic and environmental aspect.

Just before the finish line in Sønderborg, the riders will pass by the King Christian X bridge from 1930. This is the first bascule bridge ever made in Denmark, and COWI was the consultant when the bridge was rebuilt in 1966 in connection with the demolition of the railway to Als and the expansion of the traffic lane. Since then, we have managed the maintenance of the roadway surfacing, bridge pilling and mechanics. At times, this assignment has been a challenge because the bridge was subjected to collision in 1975. For a long time, the King Christian X bridge was the only connection between Als and the remaining part of Southern Jutland until another bridge, the Alssund bridge, opened in 1981 and eased the increasing car traffic.