A new bridge serving the Rhaetian Railway (RhB) in eastern Switzerland was officially opened on 18 October 2018.

Following extensive load tests throughout the day, Stefan Engler and Renato Fasciati, Chairman and CEO of the Rhaetian Railway respectively, said a few words to the gathered crowd of invited guests before a locomotive officially opened the bridge by driving through the ribbon.

The bridge will carry a single-track railway over the Hinterrhein River and A13 highway, improving journey frequency on both the Chur - St. Moritz, and Chur - Disentis-Muster routes. The bridge design was chosen following an international competition held by RhB in 2015.

"As a company, we take great pride in our innovative engineering solutions - and this is a wonderful example of such a solution. I am very proud of our engineers and technicians, who worked collaboratively with the rest of the project team to overcome challenges to deliver this elegant new bridge, in such a stunning location."

The 200m long bridge with 63m main span bridge has been named 'Sora Giuvna' or 'Little Sister' as it sits immediately alongside, and complements the existing 19th Century steel truss bridge.

Both bridges form part of the feeder line to the Rhaetian Railway's historical Albula route, which was added to the list of UNESCO World Heritage Sites in 2008.

Whilst creating concepts for the design competition, the project team recognised the enormous historical, cultural and environmental importance of the project, as well as the very particular technical challenges.

The new bridge is where the two principal tributaries of the Rhine meet and where the immediate surrounding area includes notable bridges by Christian Menn, Max Bill and Mirko Roš. Furthermore, the limited space for construction adjacent to a busy highway and alongside an active railway meant that access was always going to be difficult.

Ian Firth, COWI Project Director commented, "The team selected a slender and minimalist design with a high architectural quality to complement the dramatic mountainous environment and not detract from the adjacent structure by maximising transparency. Achieving the desired slenderness is always a challenge, particularly for a railway bridge."

This overall minimalist concept can be seen in many design features of the bridge. Inclined steel strut supports sitting on concrete river piers minimise the effective span. A V-shaped steel prop, parallel to the skew alignment of the road, was placed in the tight space between the river and the highway. The deck cross-section consists of a pair of trapezoidal semi-through steel box girders with steel crossbeams and a steel deck plate. With this arrangement, a constant girder depth could be maintained over the river and the highway. 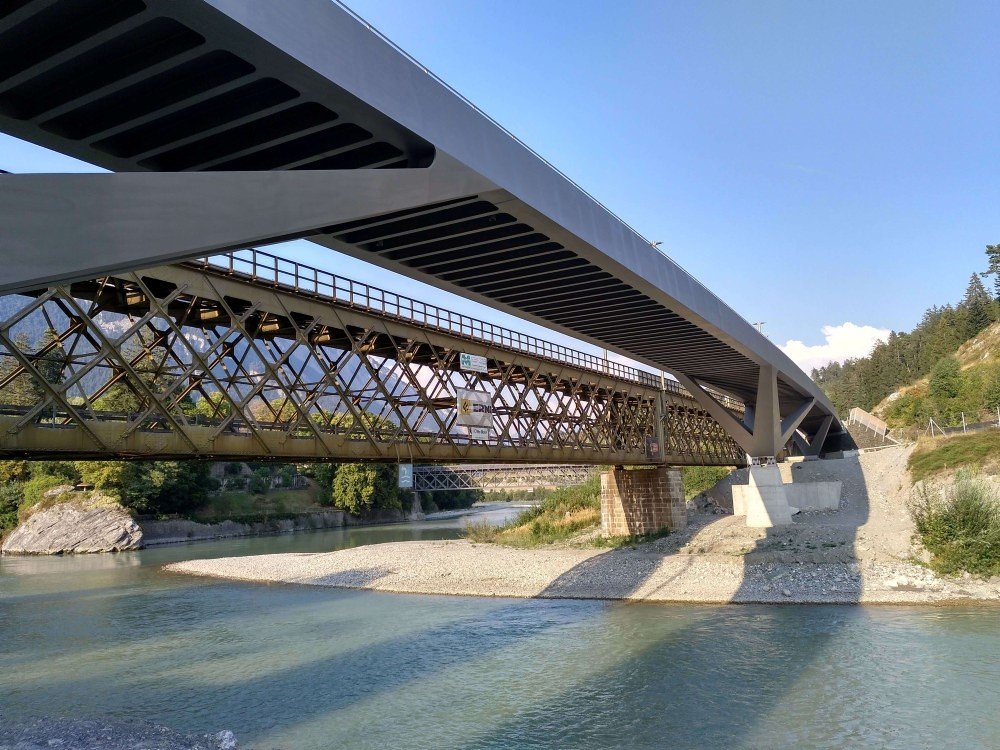 DESIGNING FOR CONSTRUCTION AND MAINTENANCE

Building a structure close to a running railway line and having limited space for temporary works forced the team to carefully consider the construction scheme from the very first sketches.

Designed to last for 100 years, the design included easy access to parts that will need to be replaced during the bridge's lifetime, including the bearings. As always, the designers worked closely with the contractors and the client to optimise a buildable and easily maintainable design. 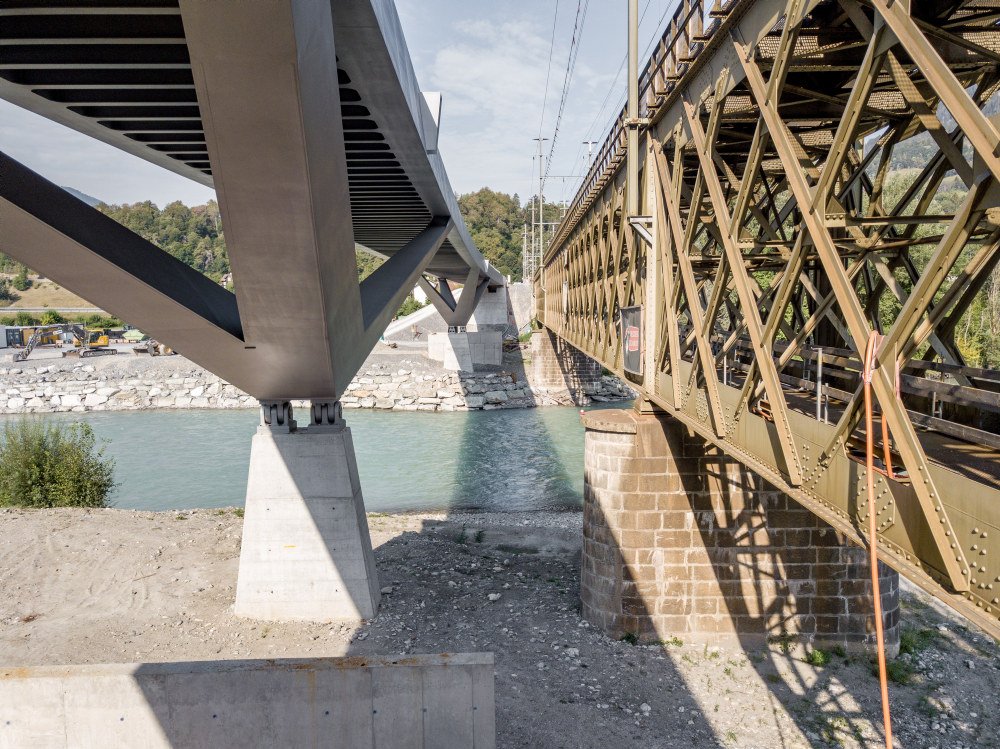 All daily railway traffic will run over the new bridge from 4 November 2018 to allow refurbishment of the historic 120-year-old truss bridge to give another 70 years of use.

As part of the scope for this new bridge, the team designed the approach viaduct replacement for the historic bridge. The 51m single span bridge will be lifted on top of the historic structure and launched over the highway in 2019. 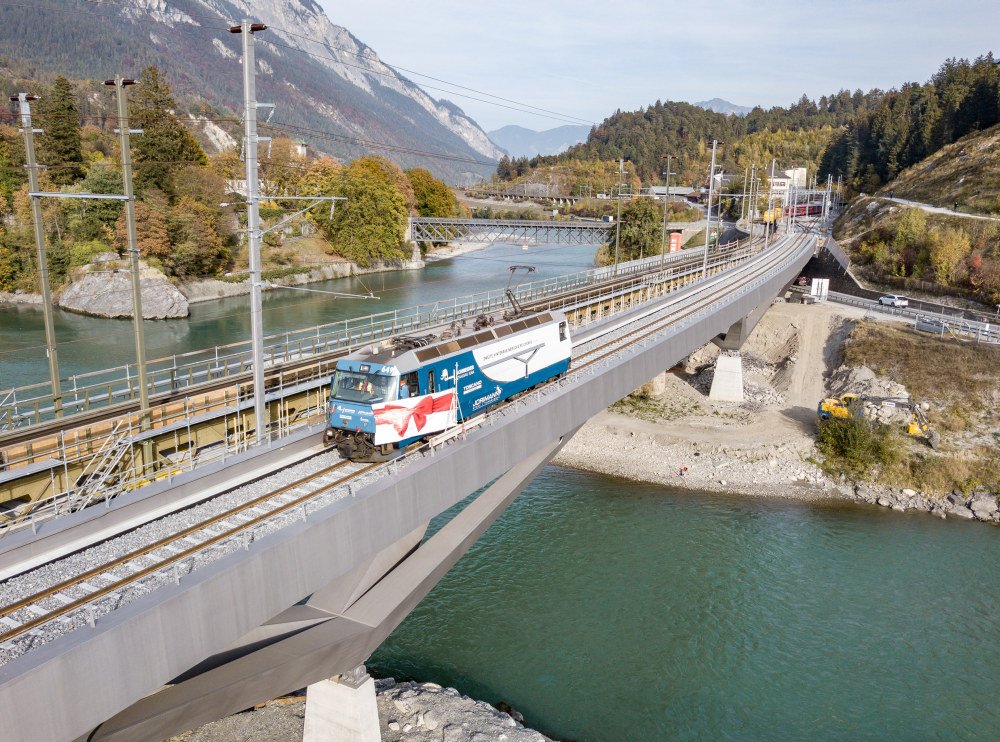