The team behind SUS2023 managed to crack the code to something that the whole building industry has been looking for. Here are a few of the team members (from the left): Torgeir Midthun Fadnes (COWI), Johannes Eggen (Nordic), Bridget White (Nordic) og Kristoffer Tungland (COWI). Photo: Ragnhild Heggem Fagerheim

While planning the Stavanger University Hospital (SUS2023), COWI and Nordic's project group cracked the code that a whole building industry has been looking for. Last night, the project was named the world's best digital construction project.

A small delegation of team members from COWI and Nordic- Office of Architecture received the gratifying news on Tuesday, November 13th; that their project was voted the world's best digital construction project. Stavanger University Hospital competed in the final round against the Chinese BeijngCBD Z6 Tower and the American Piedmont Atlanta Hospital. 196 projects in total were submitted.

It was the American IT giant Autodesk who handed out the award at the world's largest digitization conference for the construction industry. The annual conference gathers over 10,000 architects, engineers and contractors for four days to learn from the best international projects.

“We are very proud of everyone involved in this project. The project itself upgrades a whole industry and proves that Norway is at the forefront when it comes to construction in the future. Here, the interaction between contractors, engineers and architects has resulted in something new - this is a victory for the willingness to innovate, which demanded great courage from all involved parties. And it definitely paid off,” said Eskild Andersen, General Manager of Nordic- Office of Architecture.

“It is an unbelievable accomplishment to see that we are able to succeed to such a degree in digitisation and industrialisation. Today I am incredibly proud of everyone in the team and the fantastic team effort behind this. All honors to everyone who have contributed to the project's success. The client, Stavanger University Hospital, also deserves a large part of the credit. They gave the engineers and architects the necessary space in order for them to innovate," said Marius Weydahl Berg.

A digital solution that enables high quality industrialised building, a 3D studio where user groups can test the hospital before it is built, and the use of technological solutions to enhance the efficiency of the construction site - these are just some of the digital innovations that makes a global business sector look to the Norwegian hospital.

The project has also succeeded in developing an innovative concept that enables industrialised work methodology - also within the BIM model itself. The team has literally cracked the code which allows them to work with modules and placeholders where one used to have to separately detail each room separately. It provides increased efficiency, better cost control and reduces the risk of error in the planning.

Project Manager for SUS2023, Kari Gro Johanson, said that the project has skyscraping ambitions within digitisation.

“Not only will we build the best hospital we can for the resources available. We will also plan and work smarter. And we will develop methods that enable future hospitals to be built far better than they are today. The fact that our project is now, literally, the best in class globally, shows that we have done something right,” said Johanson.

Solicited advice from the oil industry and local supplier market

Industrialisation has been one of the biggest problems in the construction industry. And it was just that industrialisation code which the project team behind SUS2023 managed to break.

Johannes Eggen, Project Manager and Senior Partners in Nordic- Office of Architecture, does not think it's a coincidence that it was in Stavanger they solved it.

“The downturn in the oil industry opened for an opportunity. If you need to build under difficult conditions offshore, you must use prefabricated and module-based solutions. Everything must be packed properly and sent to the right place at the right time. We thought it was possible to use this methodology also on land-based projects. Local industry responded positive and fast when we invited them. I think this immediate adaptability is unique to the Stavanger region,” says Eggen.

The architects in the Nordic and the COWI engineers, together with the subcontractors Aart Architects, Aas Jakbsen and SLA, have worked closely with the renowned London-based company Bryden Wood.

However, despite the fact that the supplier industry has a lot of experience with prefabricated and industrialised construction, the project team soon discovered that the construction industry lacked the digital tools they needed in order to design industrialized.

Cracked the code on the night train

The US IT giant Autodesk is the world's largest software provider for the construction industry. Their foremost experts and developers were sent to Norway to find the solution. They went home to the United States with many ideas, but no answers.

“We quickly realized that this would take time which we didn’t have. The team had the concept developed, but not the tool to bring it to life,” says Kristoffer Tungland, electrical engineer in COWI.

He was given a key role in the working group to solve the challenge. Together with engineer colleague Torgeir Midthun Fadnes, they commuted with the night train between meetings in Oslo and Bergen, where they both lived.

“The hours on the night train became productive development trips. The long travels with poor internet signal became a free space to discuss ideas and to test different coding. Suddenly, Kristoffer had literally cracked the code that enabled the new way of working. It was a breakthrough, something no-one else in the world had done before,” says Fadnes.

Digitisation and industrialisation of the construction industry will lead to huge gains. By producing modules under controlled conditions, the number of errors in the projects is reduces, one gets a more time-efficient process and it increases the quality considerably. In other words, the methodology provides monetary gains as well as potentially better experience for end users of the buildings.

“We have a vision of being able to build the hospital without drilling, cutting and adapting on site. As much as possible, will come flat-packed or as finished modules you can simply lift and connect in the building. In addition, digitisation has made it possible to involve everyone from suppliers, carpenters, nurses and doctors already in the planning phase. This means better solutions and fewer mistakes both during the construction and when the hospital is completed,” Johanson says. 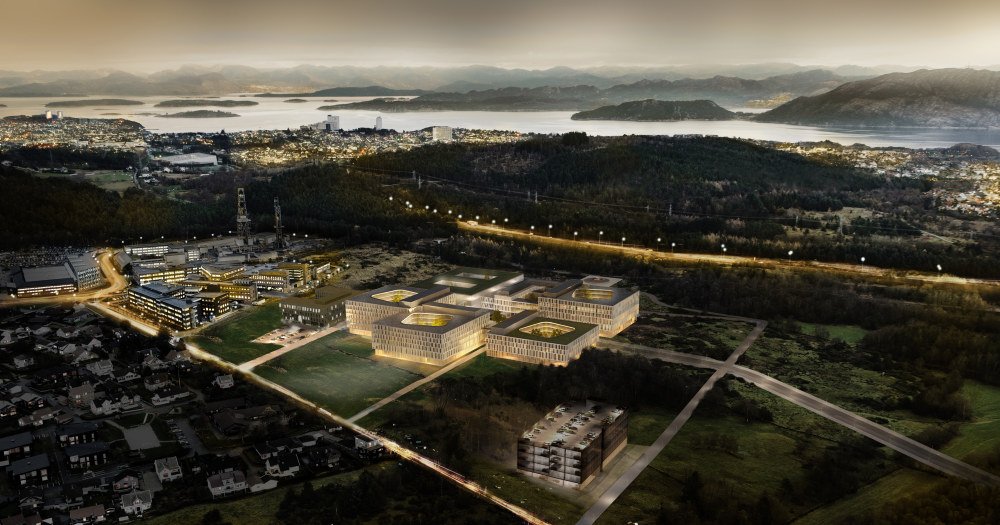