This is the story about COWI's development from a small one-man engineering company to the global full-service consulting company COWI is today. Here, you can read about our many projects and innovative solutions, which have shaped the world for more than 90 years.

After working abroad for six years, young engineer Christen Ostenfeld returned to his hometown of Copenhagen in 1930. Full of creative energy, the 29-year old established his business in a small apartment in Copenhagen's working-class neighbourhood, Vesterbro, and went straight to work. 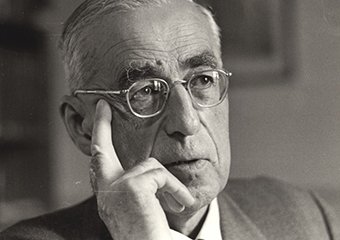 Just a stone's throw from the office, Ostenfeld's first major assignment was a comprehensive renovation of the run-down Scala theatre.

Above: This is a photo of the original National-Scala, Scandinavia's largest entertainment venue at the time.

With a short deadline, Ostenfeld had to work fast. He introduced prefabricated steel structures which allowed the contractors to keep up the pace, even in the cold Danish winter. One year later, in 1931, the official opening of the National-Scala took place with 2,000 guests, dressed to impress.

Ostenfeld was an immediate success – and he was determined not to rest on his laurels. Christen Ostenfeld used his strong network to generate a new business, and as an expert in bridges and structural engineering, he had plenty to do. He successfully developed a technique to create roofs and domes using barrel vault structures. With this technique, Ostenfeld designed factory and sport halls. He designed some of Denmark's most iconic buildings of the 1930s, including the Aggersund Bridge in Northern Denmark and K.B. Hallen in Copenhagen.

Above: Ostenfeld designed the 150-meter long Aggersund Bridge, spanning the Limfjord. The bridge was inaugurated in 1942 as the first major Danish bridge designed by a private engineering consultancy.

When it opened in 1938, it was Europe's largest private sports complex, with seats for 5,000 spectators. But it was rock 'n' roll that put K.B. Hallen on the map: in 1964, the venue hosted the first and only concert in Denmark by The Beatles. The Rolling Stones, B.B. King, Jimi Hendrix and Miles Davis also played there.

Gentofte Badminton Klub, a sports club in the suburbs of northern Copenhagen, moved in to its current badminton hall in 1936. Christen Ostenfeld's young engineering firm designed the project – and Ostenfeld himself stopped by to celebrate the inauguration of the building.

In 1946, Wriborg W. Jønson became a full partner and the company – which now had 25 employees – changed its name to "Chr. Ostenfeld & W. Jønson, Rådgivende Ingeniører" (in short, Ostenfeld & Jønson).

Shortly after the war, Ostenfeld travelled to France to learn about prestressed concrete. The outcome was the design of a cylindrical tank for liquids and granulated materials. . This was the first example of what would later become the world-renowned Ostenfeld Silo.

The Ostenfeld Silo set itself apart from the rest. Despite the silo's huge dimensions, the walls were just 25 cm thick, making it significantly cheaper to build. Being prestressed, the walls could still bear the pressure from within and remain sealed.

Above: The suspension bridge at Uittamo in Finland, 1960, was an important technical breakthrough for Ostenfeld & Jønson.

Prestressed concrete turned out to be useful for more than just silos. The dynamic duo, Ostenfeld & Jønson – and their staff of now 50 people – became Scandinavia's undisputed favorite consulting firm within the construction industry.

The company went global with the opening of an office in Paris in 1955, and in 1960, Ostenfeld & Jønson opened branches in Ghana and Nigeria. An office in Tanzania was established in 1965. The company engineered several industrial buildings – among them a brewery – but quickly moved on to focus on water projects. Ostenfeld & Jønson won contracts all over the world, and was now engineering tunnels, tram depots, cotton mills, concrete tanks for boiling laundry water, wastewater treatment plants and countless swimming baths and bridges.

Above: The Little Belt Bridge is a 6-lane suspension bridge with a main span of 600 m. Opened in 1970; the bridge links Funen with Jutland.

In 1960, two suspension bridges at Uittamo and Pargas in Finland marked a breakthrough for the firm's bridge building division. These bridges shaped the design for a new motorway bridge across the Little Belt in Denmark, the New Little Belt Bridge.

The pylon legs rise 121 m above sea level. At 70,000 tonnes each, the two buried anchor blocks, with their wing-shaped bottom slabs, resist 17,000 tonnes of force from the main cables.

COWI delivered the conceptual design, site investigations, tender documents, detailed design, administration and supervision. For an old school, jazzy and highly detailed 'podcast' about the bridge, listen to or download the narration track for the film, The Motorway over the Little Belt from 1970.

Chr. Ostenfeld & W. Jønson became COWIconsult when Christen Ostenfeld retired in 1972. The present form of a foundation-owned company was introduced.

THE ENVIRONMENT TAKES THE STAGE

The oil crises of the 1970s affected COWI's operations since the Danish government put a stop to all major state construction projects. Nevertheless, possibilities emerged in the fields of energy and environment as a result of society’s demand for solutions.

Together with the Technical University of Denmark (DTU), COWI developed a so-called zero-energy house in 1974, which became an important study project in future, green buildings.

Early on, COWI built expertise in water treatment and supply, undertaking projects in Denmark and the Middle East. That gave the company a solid foundation, which proved useful when the environment truly took the stage in the 1970s. That is one of many examples of how COWI started building an expertise before it turned into a real business area.

Biologists and chemical engineers were hired in the 1970s, which was a rare sight in engineering companies. When Kenya launched a highly ambitious project in 1978, funded by the World Bank, to secure access for all to clean drinking water in 2000, COWI was the natural choice of cooperation partner.

By 1979, the company had more than 800 employees, generating a third of its turnover abroad. Moving in to new markets, the company won major assignments in Africa, the Middle East and, later on, the former Soviet Bloc.

In the 1980s, we entered environmental consulting and carried out projects involving treatment of wastewater and air pollution.

New environmental legislation ordered Danish municipalities to clean up contaminated soil and secure better handling of wastewater. New legislation on indoor climate was introduced. COWI developed analysis models and, was an important partner in mapping the problem of highly dangerous asbestos and finding solutions for how to deal with the problem. 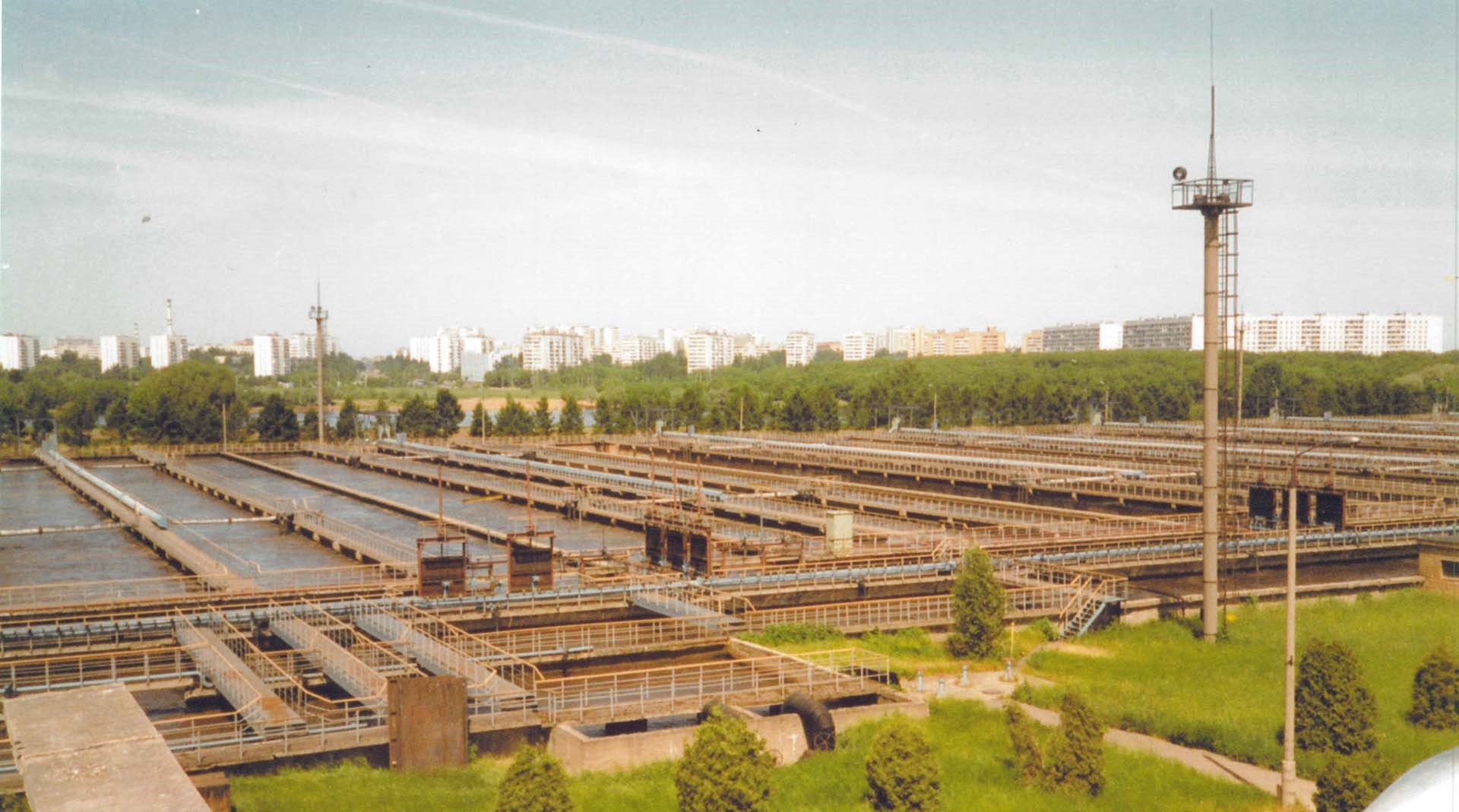 Above: View of the Kuryanovo wastewater treatment plant in Moscow, which COWI designed from 1992.

With the fall of the Iron Curtain, the company established offices in Moscow, Latvia, Hungary, and Lithuania.

The company collaborated with the World Bank and the United Nations Development Programme on projects in developing countries.

COWI became a consultant for public and government authorities, and in relation to integrattion of environmental solutions in construction projects. As a result, a lot of other professional groups were hired to supplement engineers – for instance, economists, lawyers, and social scientists. Planning and analysis in welfare, urban development and transportation were just as important as big construction projects.

Thanks to our success with the Little Belt Bridge, COWI was awarded the Great Belt project and won all the three major tenders: the tunnel, the West Bridge in 1988 and the East Bridge in 1990. When inaugurated in 1998, the East Bridge was the second longest suspension bridge in the world.

The earliest design for The Great Belt Bridge was in 1936, and up until the construction of the final bridge in 1998 it had changed many times. Watch the video below to see how the bridge has been imagined over the years.

In the mid 1990s, Danish authorities decided to build a metro in Copenhagen to prepare for the city’s growth, and kick-start the development of a new urban area, the Ørestad district.COWI was responsible for the overall design coordination of the 21 km network and its 22 stations. This work included the supervision of works on tunnels, stations, emergency shafts and the mitigation procedure against potential damage to neighbouring buildings. The green line opened up to passengers in 2002, the yellow line in 2007, and the City Circle Line (blue and red lines) with 17 new stations, each the size of a handball court, opened in 2019. This has brought up the number of stations to a total of 39.Read more about Copenhagen Metro.

COWI consolidated this position by acquiring Swedish company Flygfältsbyrån in 2009 and leading UK tunnel and underground engineering consultants Donaldson Associates Ltd in 2014.
Since the start of the millennium, COWI has engineered a long suite of projects within transportation, energy, waste management, water and construction In 2010, sustainability became an official part of our vision and, together with the interdisciplinary approach, an important focus area in our projects.

Within transportation COWI has designed the Tanzam Highway in Tanzania (2005), (2010) the Doha Metro in Qatar (2013), and renovated the Gardamoen airport in Norway in many turns since the first design in 1990. Energy-efficient solutions became cornerstones of the extension project with the ambition to build the world's greenest airport.

COWI designed the London Array wind farm in 2010, which kickstarted wind projects all over the world. With the expansion in North America, this business area grew with projects both there and in Asia.

The environment was still on the agenda throughout the decade, and COWI carried out waste projects in Africa and South-East Asia. Bridges were still an important part of COWI's business areas. A few of these were Stonecutters Bridge in Hong Kong (2009), Osman Gazi in Turkey (2016), Mersey Gateway in UK (2017) and Hålogaland in Norway (2018).

The variety of construction projects also included hospitals and urban development, where sustainability played an important role. Among these were The Danish Architecture Centre, BLOX, in Copenhagen (2018), Nordea Headquarters (2017) and the development of zero-emission retail store for Lidl in Sweden (2020).

In November 2018, COWI acquired Denmark's largest architectural practice, Arkitema - COWI's biggest ever acquisition. Arkitema is specialised in housing, urban design, office buildings, health and educational buildings. Amongst others it is known for the Sluseholmen, an artificial peninsula in the southern part of the Port of Copenhagen, Denmark.

At any given time, COWI is involved in approximately 9,000 projects across the globe.