Lasse Riget Juul (30) – Fire Safety Consultant, Buildings in Aarhus
"If my work wasn’t important before, it sure was afterwards…”

Despite his young age, Lasse always knew that he wanted to fight fires. That is what comes of being the firefighter’s son. But he had not expected to fight against fire hazards on both a theoretical and practical level. Meet COWI's fire-fighter – who sometimes storms out the door in office hours to put out a fire in Eastern Jutland.

When I suddenly stop what I’m doing and storm out COWI's main entrance in Aarhus, my colleagues know what’s up. They shout encouraging words while I run by them and they’re always eager to hear the details when I get back.

My dad has worked at the same fire station in Aarhus since 1989, and I used to visit a lot, growing up. When I was 14 or 15, I got to tag along on a couple of 24-hour shifts and rode with the fire inspector. Driving through the city at 130 km/h, lights flashing – that was the biggest rush. And it still is, I have to admit.

Today, I fight fire in two ways; with COWI as a fire safety consultant, and as a part-time fire-fighter. That means that I’m sometimes called in in the middle of office hours and have to rush out the door to put out a fire with my fellow fire-fighters. Fortunately, my colleagues have got used to that happening.

The toughest part of my job as a part-time fire-fighter was my first fire that involved a person dying in the flames. That made its mark on me. If my work wasn’t important before, it sure was afterwards. 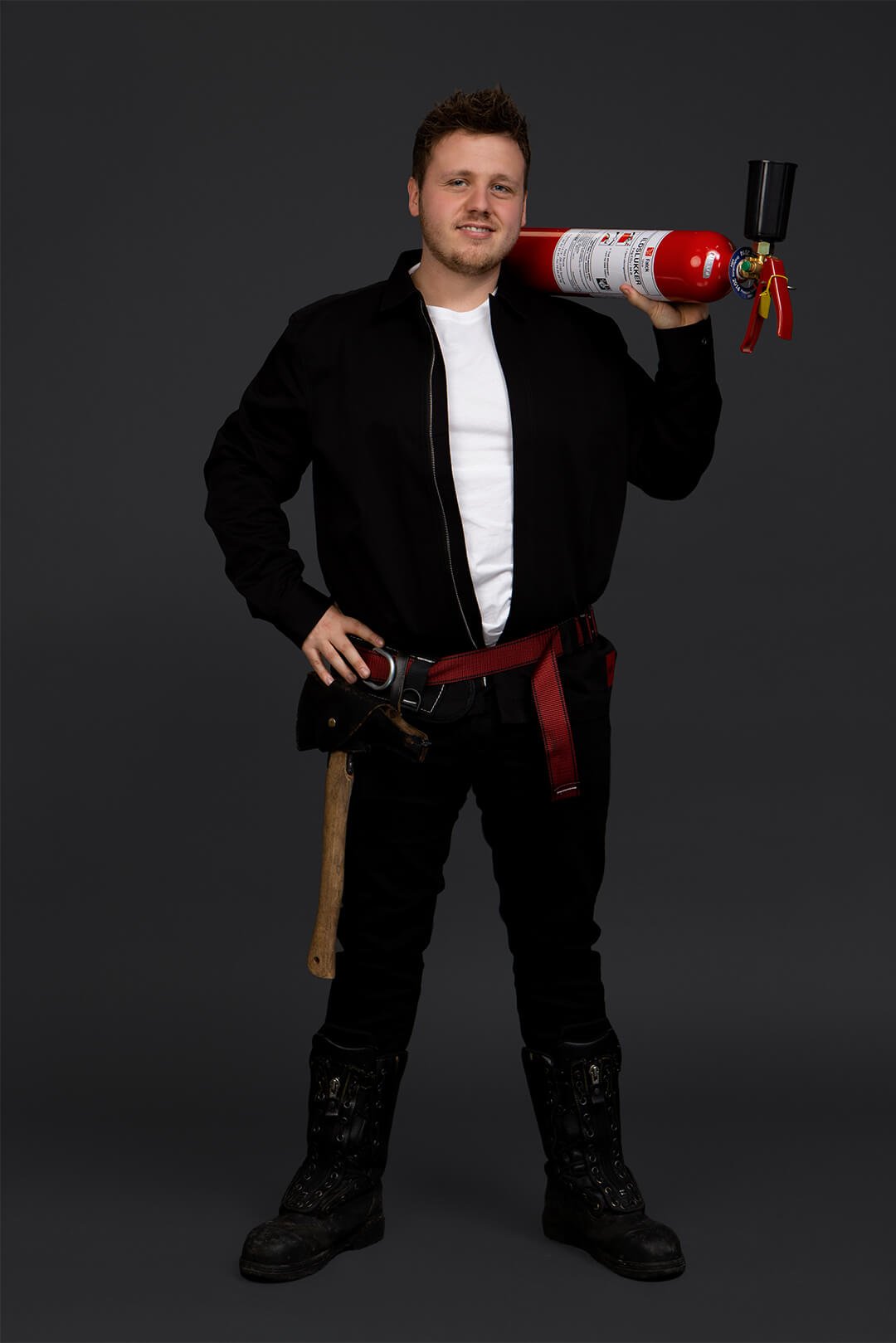 I work to put myself out of work

Both jobs are basically about the same thing – namely keeping people safe. With COWI, my consultancy services on building projects aim to ensure that the buildings reach the highest level of fire safety. Among other things, I study the big fires – like the Hafnia fire in Copenhagen – and help make sure they don’t repeat themselves. If a fire should arise, my job should help people vacate buildings safe and sound, and help us fire-fighters enter buildings and put out fires in a safe manner. So, I guess you could say that my job with COWI aims to put myself out of work as a fire-fighter – a bit crazy.

Fire safety consultancy is a so-called ‘assessment discipline’ – because even though a book of answers of sorts exists, much of my job is about coming up with a solution that secures the same level of safety without following the book of answers in every particular. That’s why it’s important to bounce ideas off my colleagues.

Take, for instance, the waterworks of the Greater Copenhagen Utility (Hofor), which was a huge project that landed on my desk when I joined COWI three years ago. I was just asked to take a look at the case, and it’s still on my desk – it’s that big. My job is to analyse and document why it’s okay to leave out some of the fire safety details that are normally required. Simply because waterworks usually don’t catch on fire, and because the spaces are so big that a fire that might be serious in a small cleaning room would not affect a big waterworks. No, I don’t know how to build a bonfire

There is a strong connecting thread between my job and my nerdy passion, because they boil down to the same thing. When I’m fighting fires, I constantly acquire knowledge about, say, escape routes, structures, fire ignition, materials, rescue possibilities and hose length – and that knowledge is valuable to my job in COWI when giving advice to our constructing engineers. I know what’s needed out in the field. On the other hand, I definitely see buildings differently than some of my fellow fire-fighters, who have other day jobs. For instance, I quickly spot the separations between fire sections and are aware of them.

There is definitely a bit of occupational hazard going on – you can often find me spotting fire hazards across the city, thinking “seriously, don’t they know they blocked the fire door?” Because of my interest in fire, a lot of my friends think I’m great at building bonfires – so they always want me to build a bonfire. Then, I need to point out that I’m better at putting out fires, though.

How do you define being a nerd?
“Being passionate about something and having it really take up your daily life. For instance, I still turn to watch if a fire truck passes by me in the street. And earlier this year, when I visited COWI in India, I was scouting for fire trucks. I myself used to consider being a nerd a negative quality, but I’d like to make it a positive quality!”

Which nerd do you admire the most – and why?
“For sure, my colleague Jesper Arpe – he’s a fountain of wisdom in our discipline. He’s immensely talented and he gives his all in his work – his heart is in it. He’s also always ready to pass on knowledge, so he’s taught me a lot.”

What do you want to get better at – and why?
“I’m doing my master’s degree to learn more about how a fire behaves in theory. That will help me achieve a higher class of certification in fire safety consultancy.”
These weeks, we celebrate our ingenørds. The smart, the fun, the great colleagues. Do you want to join us? Then check out our vacant positions in Denmark.