Henrik Ussing Lynge (62 years) – Leading Project Manager – Utility, Legal and Surveying in Aalborg
"I can’t promise that you live longer, but you surely get a positive energy boost"

Some joke that whenever more than two Danes get together, they form an association – in case of Henrik Ussing Lynge, that is pretty spot on. His heart beats for team spirit and his small local community of Løkken, Northern Jutland. He is less excited about canons these days, though…

Without a doubt, community is important to me. To me, a good day at work means jointly succeeding in the tasks we set out to perform. I treasure teamwork. Having a common goal – and the journey towards achieving it – are what matters the most.

Team spirit is a must-have

When I joined COWI in 1985, I was the second surveyor in company history, and we worked on natural gas systems throughout Jutland. So much has happened in the past 35 years, especially in terms of our tools, but one thing has stayed the same: The team spirit I see and feel. The best thing is to have fun while doing serious work – and that’s exactly what we do.

I’ve been a part of numerous large-scale COWI projects over the course of my professional life. As an example of an incredible team spirit, the three and a half years I spent working on the West Bridge of the Great Belt Link stand out as really special. Everyone was seconded to the construction site and away from the comfort of home. As a result, we would spend our spare-time bonding over activities that meant something. Almost like one big family.

Today, I live in Løkken – a small community with 1,600 inhabitants, who know that it takes a solid sense of fellowship, a common goal, democracy and perseverance to get things done. Especially when the municipality is short of funds – because then it’s up to us to take action.

The project close to my heart

That can also be said for Løkken Miniature Town – a historical building project that I’m involved in. The idea is to build a miniature model of the old district of Løkken showing what it looked like in 1900, and to use the materials and techniques that were used back then. 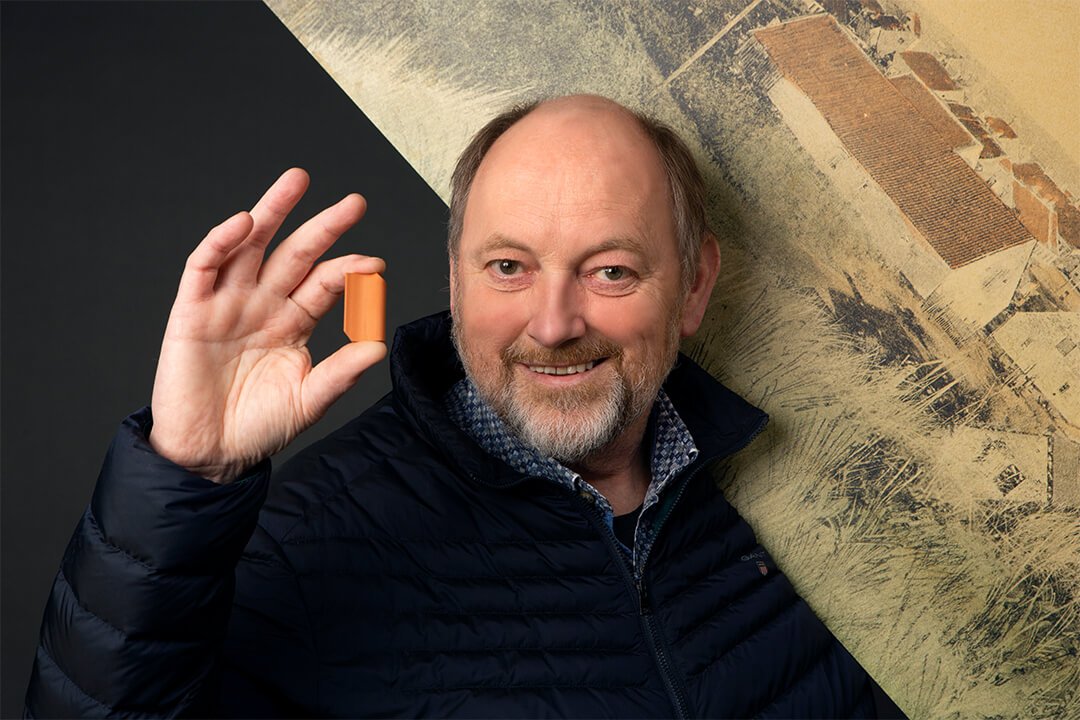 We make bricks and roof tiles using red clay and burn them at around 940 to 1,050 °C. We are based at the local tileworks, which backs the project by letting us use its premises for free. We create the building components and model houses in a scale of 1:10, and it takes almost 10,000 bricks and some 2,000 roof tiles to make one standard fisherman’s cottage. That’s quite delicate work for old, weary hands, but who cares as long as you are enjoying yourself.

I’m not a hands-on miniature builder myself: I stay in the wings, managing the funds and securing the overall framework for the workshop. The project is definitely also a social project, since our miniature builders range in age from 65 to 93. At one point, I had made a sponsor agreement with the local general practitioners, but they terminated the agreement a couple of years in. They said that “we were stealing their customers”. It was a joke, of course, but working on the model helps keep the members active. I can’t promise that you live longer, but you do get a positive energy boost. 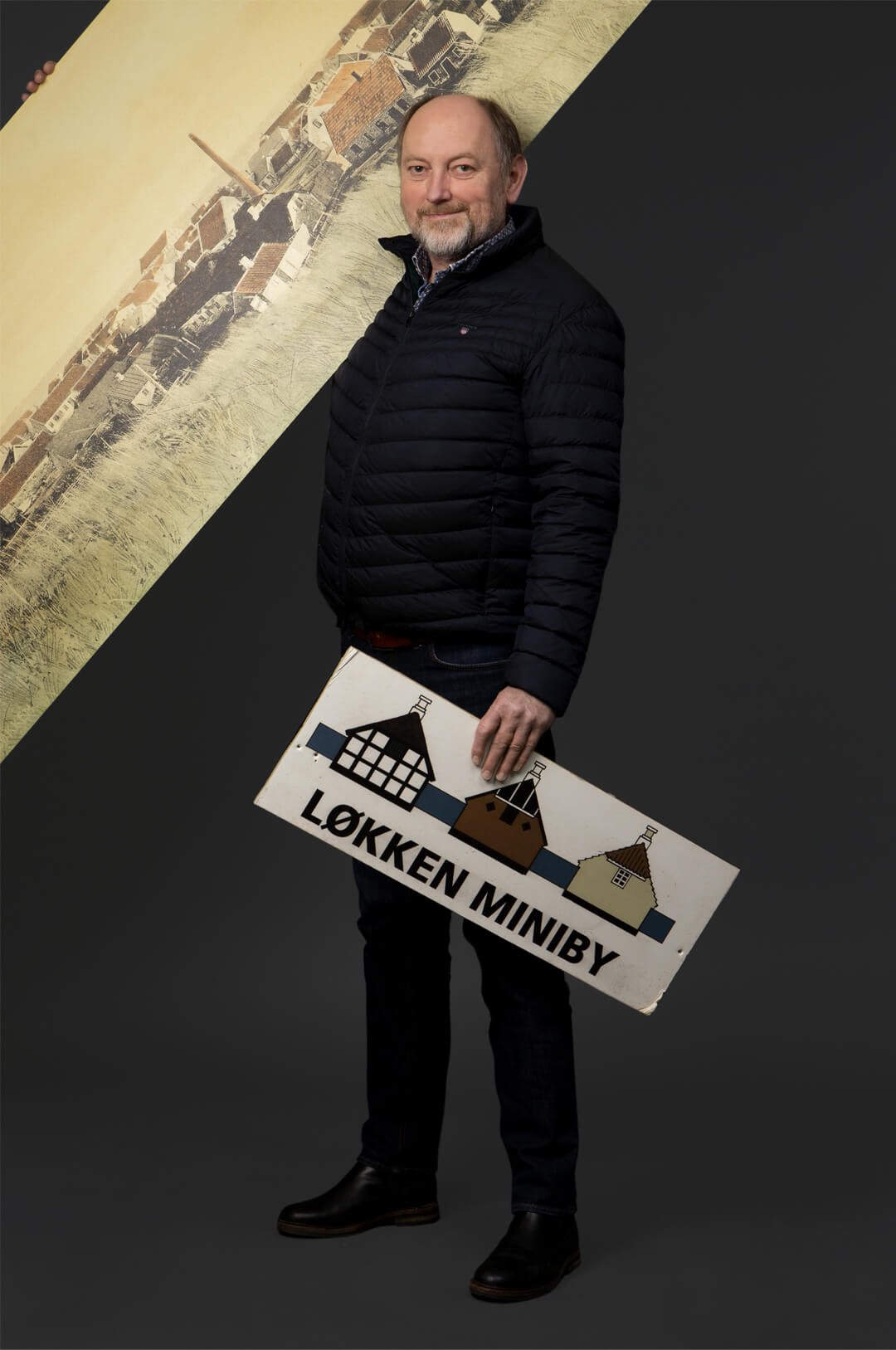 The miniature town is really close to my heart, because it’s a sanctuary for the some 10 or 15 senior citizens involved in the project and the some 150 passive members. At its core, the project boils down to the people involved, a sense of community, dialogue and respect. This type of association is a wonderful setting for identity and fellowship. I’m often surprised by how willing people are to open their lives and let other people in – even though we’re practically strangers that only have one thing in common, namely our association.

Adieu to the cannon guild

I also gave up a bit of myself to achieve a goal – literally speaking. In 2006, I was part of the Løkken Cannon Guild when a cannon, filled with black powder, exploded. The breech-piece went right through my shin, tearing off five centimetres of it. That cost me a couple of months in bed, but other than that I’ve made a fair recovery. And no, I’m no longer a member of the cannon guild…

Other than Løkken Miniature Town and the cannon guild, Henrik has been involved in a broad range of associations over the years. Here are some of Henrik’s directorships:

When I look at the associations I spend my spare time on, working with others is definitely what piques my interest – and I use that in my role as project manager in COWI. To me, honesty and communication are the most important tools – and respect for every single link in the chain. You could think of my department as an engine – you need every single part to make it work. I want to foster the sense of tribe, rooted in common values that we can be proud of. I have this saying: “When we succeed, we succeed together. And when we fail, we fail together”.

How do you define being a nerd?
“Nerds are probably usually considered introvert, dedicated, narrow-minded and not particularly sociable, but in my opinion, you can be a good, decent person and still be dedicated to your interest. The key thing is to find a balance between work life and private life, to make sure we are whole and happy beings.”

Which nerd do you admire the most?
“People didn’t think of A. P. Møller as a nerd, even though he was far-sighted and excelled at his job. He did have a great motto, though: ‘If you have the abilities, you also have the obligation to use them’. If you tweak it a bit and apply it in the context of your daily life, I think that’s a fine rule to live by.”

What do you want to get better at – and why?
“One very specific skill: I’ve started cold smoking fish. It tastes divine, but controlling the temperature is tricky – you need to keep it below 27 °C during warm seasons. I need to find a way to crack that code, and I will somehow.”
These weeks, we celebrate our ingenørds. The smart, the fun, the great colleagues. Do you want to join us? Then check out our vacant positions in Denmark.