There are many benefits associated with using a linear asset management (LAM) system for maintaining railway assets. A LAM system ensures a complete overview of all relevant data, and that the data is reliable and up to date. The system also makes it possible to connect countless data sources, thus getting valuable knowledge, which opens to cost savings and a drastic reduction in carbon emissions.

Reliable and up-to-date large data sets are crucial for ensuring continued economically and environmentally sustainable management of rail assets. However, a conventional asset management system deals with discrete assets. It is, therefore, not suited for railway tracks that are continuous and consist of components that cannot always be divided into independent parts.

“A LAM system, on the other hand, allows you to describe and manage objects or systems that are defined by their length and whose condition and properties may vary from section to section,” says André Filipe da Silva Rodrigues, Specialist in Railways and Metro at COWI.

According to Rodrigues, a LAM system provides detailed information on the condition of the rails on specific sections of the railway network – for example, on the railway profile used, the steel quality, the degree of wear and tear, the installation date and the status of maintenance. The system also collects and continuously updates data from varied sources and in different formats, such as the track’s geometry and the assets’ condition on the stretch.

“Without access to a LAM system, it is challenging to handle situations that require interoperation and analysis of data types from a variety of sources. For example, identifying when to perform safety-related maintenance of track components is linked to, among other things, component material and track geometry, as well as rail traffic density and speed. At the same time, the condition of different assets affects each other. For example, rail surface degradation leads to poor wheel-rail contact, accelerating damage to fasteners, sleepers and ballast, creating a feedback loop, where the condition of the rail surface is further deteriorated,” says Rodrigues. 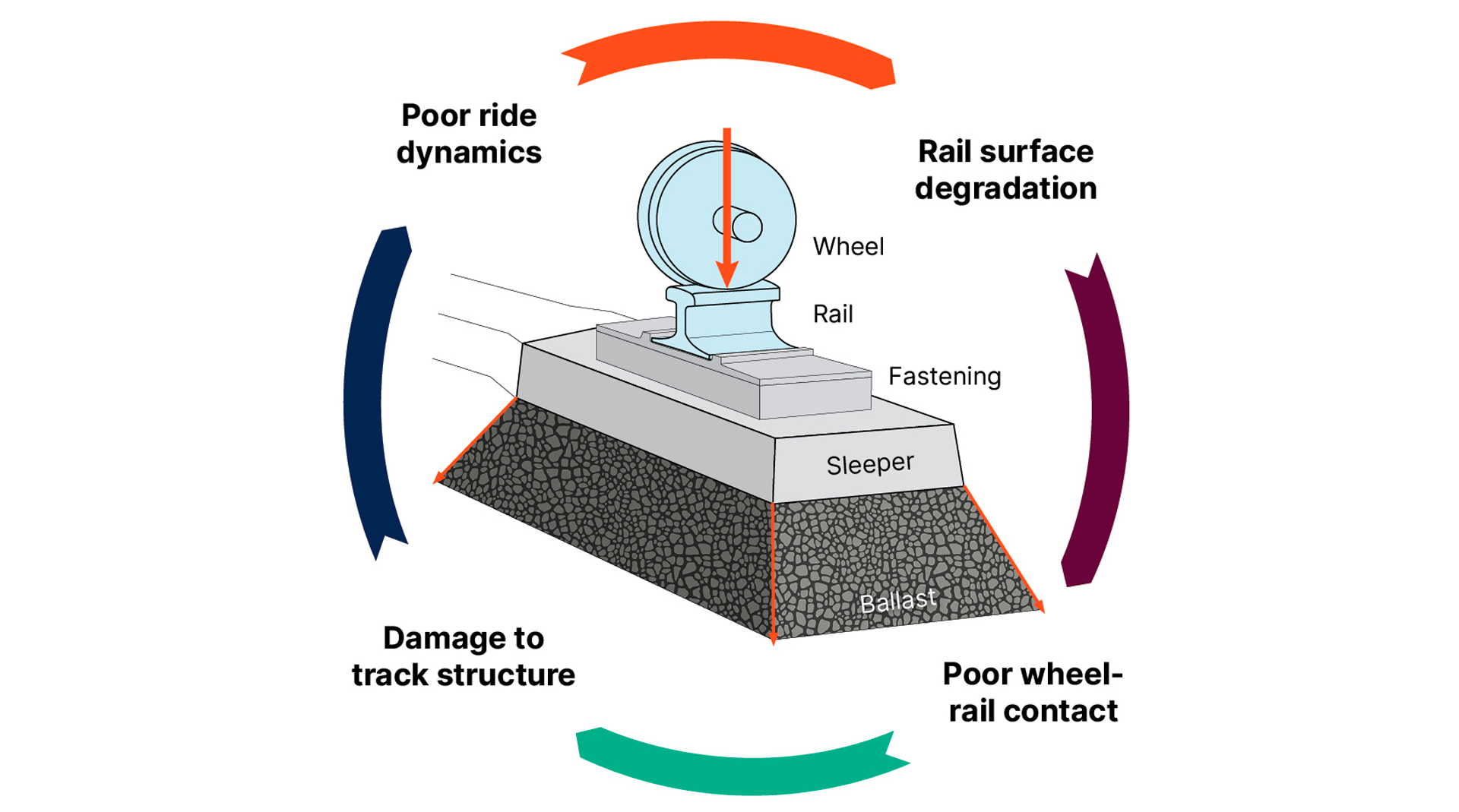 
COMMON INTERFACE FOR EVERYBODY INVOLVED

“In the above example, it may be useful to maintain or replace several or all track elements within a short period of time to avoid starting a feedback loop resulting in track degradation. In case there is a need to both maintain some and replace other track elements, it can be an advantage to do both in one project. However, this can also end up extending the period during which the infrastructure is inaccessible,” he says, pointing out that a LAM system enables such complex analyses and offers, among other things, the following advantages:

Rodrigues emphasises that the more information and features are added to the LAM system, the more connections between different assets, data sources and parts of the organisation can be made. He explains that with the LAM system, we don’t simply use the data on the condition of the asset. We also look at other data that might help predict how the condition will develop over time. And this is essential to ensuring proper maintenance and avoiding serious situations.

“If a rail surface is not adequately maintained, it starts to deform due to so-called rolling contact fatigue (RCF). These are plastic deformations which gradually turn into microscopic cracks – rail defects – which develop at an increasing rate. The deeper the crack, the faster it grows. And if the defect is allowed to develop uncontrollably, it will compromise the cross-section of the rail and potentially lead to broken rails, which in the worst case can cause a railway accident,” he says. 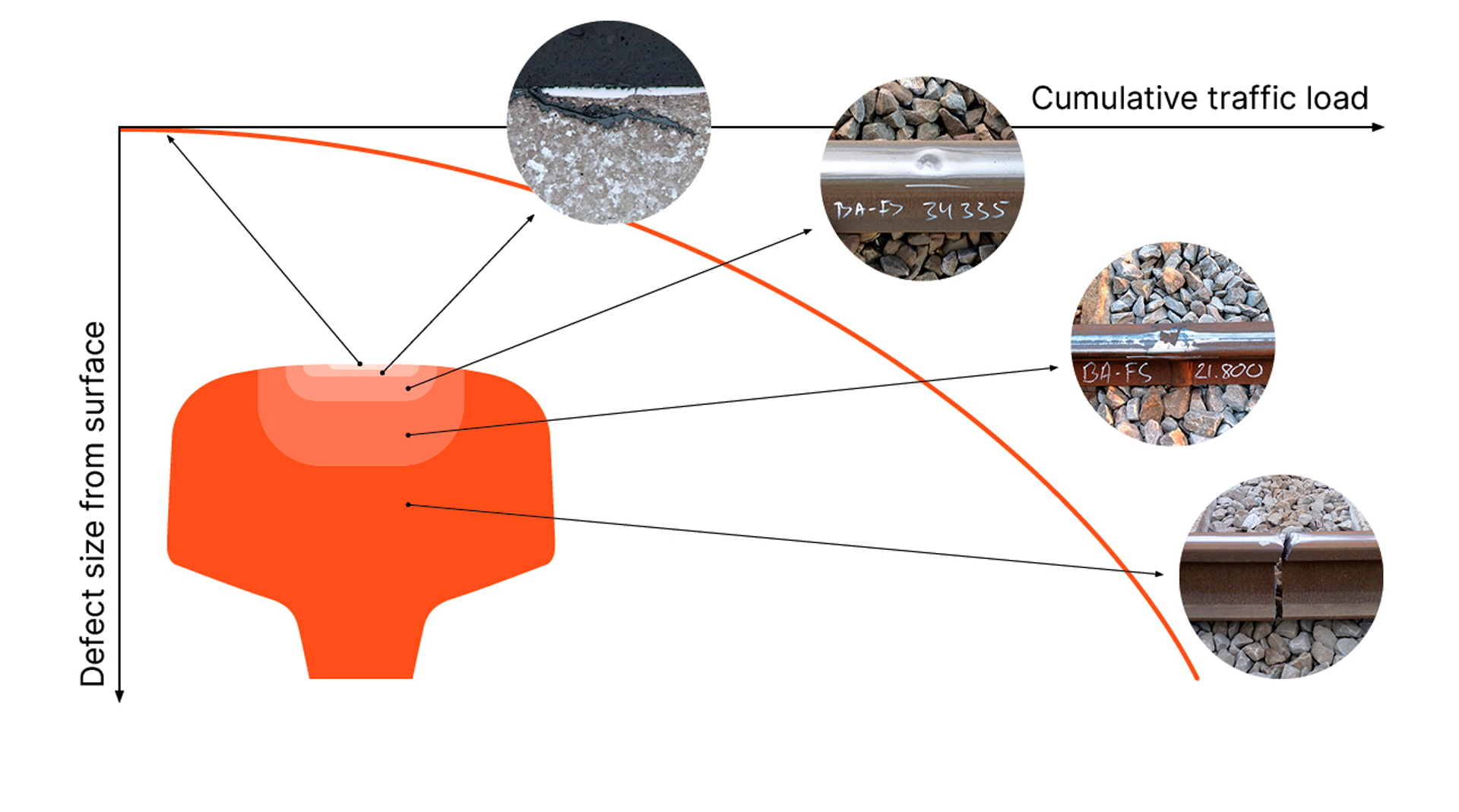 PREDICTING THE CONDITION OF RAILS

According to Rodrigues, the LAM system makes it possible to combine alternative measurement methods with those already in use for detecting railway defects, paving the way for replacing both cyclical and reactive maintenance with a maintenance concept based on the detected or predicted condition of the rails.

“For example, a good candidate is the acoustic roughness of the rail surface, which is typically measured to determine whether too much noise is generated from the wheel-rail contact. An increased roughness is often the precursor to or directly indicates a more severe surface deformation. To establish such a correlation, it is necessary to analyse historical data from all relevant sources, including rail type and age, traffic load and speed and track geometry,” he says and continues:

“By using a LAM system, the initial and often time-consuming phase of ensuring that all data is reliable and correctly placed in the system can be reduced to a minimum, as all data is already up to date and included in the LAM system. When we detect or predict rail defects early, we can remove a small amount of surface material before the degradation accelerates. Thus, you can ensure that rail grinding or milling takes place at an early stage, based on the level or nature of the measured acoustic roughness and the specific combination of data.” 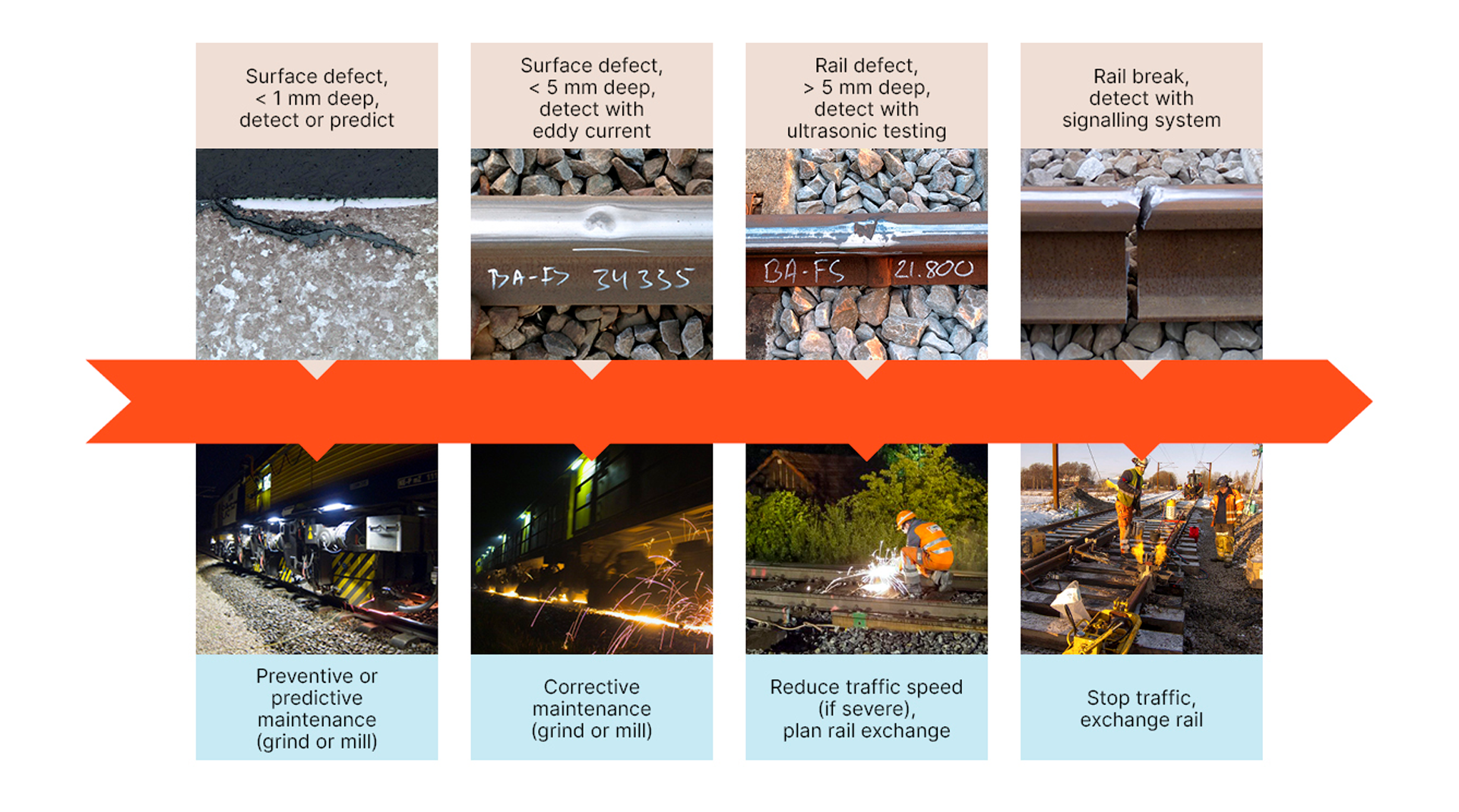 Furthermore, the fact that all the data needed to decide on the need for action is already included in the LAM system provides direct access to implement management systems that generate and prioritise the necessary actions. It also enables planning and coordination with the rest of the organisation using customised interfaces, as well as letting you generate work orders and, after maintenance has been carried out, calculate the work done, record and track it and evaluate the impact it has had on the rails’ condition.

In addition to the cost savings associated with this approach, it significantly reduces carbon emissions compared to other maintenance methods. And there are several reasons for this.

If rail surface defects are not prevented or eliminated, the rails must be replaced much earlier than would otherwise be necessary. At the same time, the service life of rails is significantly reduced if surface defects are not rectified until they have been detected – for example, in a reactive maintenance concept – as this typically means that a relatively large part of the surface must be removed. There are also considerable carbon emissions associated with operating grinding or milling machines and their transport because most contractors are international companies moving equipment all over Europe to provide their services.

“Using a preventive LAM maintenance concept, you can remove just the right amount of rail material to prevent errors on a given section. This extends the lifetime of the rails significantly, reducing the use of natural resources and saving large amounts of CO2 for steel production. This approach also minimises both emergency maintenance in connection with rail surface defects and critical rail defects, as well as the need for planned maintenance,” Rodrigues says and continues:

“The overall result is an improved transport infrastructure with fewer delays and cancellations. That means less carbon emissions from rail replacement transport when trains are not running and more reliable public transport, encouraging more people to go by train and discouraging them from buying their own vehicle or a second car, which would increase their carbon footprint.”

According to Rodrigues, the described approach to establishing a predictive maintenance strategy for rails using a LAM system can also be extended to other track components. Data on fast-growing deviations in the track’s geometry can, for example, be linked to ballast degradation or degraded quality of the track base, just as acceleration measurements of axle boxes can be correlated with problems with the fastening system, such as missing bolts or cracks in sleepers. As a third example, defects in the mechanical components of turnouts and crossings can be linked to data on, among other things, the condition of the rail surface, track geometry and measurements of the turnout system.

“By leveraging the LAM system’s ability to collect and interconnect large data sets from a wide range of sources, infrastructure managers can use all available data to plan optimised maintenance actions that are both economically and environmentally sustainable and have a minimal impact on track availability and reliability,” he concludes.

André Filipe da Silva Rodrigues has a PhD in Civil Engineering, for which he developed computer models of railway tracks. He used this knowledge as an assistant technical system responsible for rails in Banedanmark for four years, where he was also the system administrator for the company’s LAM system. As part of his work, he developed models to predict rail defects and estimate the need for rail renewal, contributed to the development of the rail maintenance strategy, developed technical specifications for mechanised ultrasonic measurement of rails and collaborated with researchers at DTU on the application of machine learning for image recognition of rail surface defects and the degradation of turnouts and crossings. In COWI, André works as a consulting expert, focusing on the application of LAM systems and data-driven railway maintenance.

Energy Insights
The floating wind forecast: mostly sunny with a chance of showers
Tunnels Insights
To understand the future of tunnels we must look to the past
Green transition Insights
Electrolysis: The Backbone of the Green Transition