ELECTROLYSIS:
THE BACKBONE OF THE GREEN TRANSITION

Electrolysis of water, at its simplest level, is the use of an electrical current to split water molecules into hydrogen and oxygen. The technology has been around for hundreds of years, but is now experiencing a massive boom in investment, research and development, driven by the urgent need to decarbonize.

When paired with renewable electricity, electrolysis produces green hydrogen, which emits only water and has a higher energy availability per unit mass than any other substance. Storing the electricity as hydrogen unleashes the full potential of renewable energy, namely wind and solar, by overcoming the challenge of intermittency. Green hydrogen can also be used to power fuel cells, or to synthesise more complex green fuels, including kerosene, methanol and ammonia. These green fuels are expected to outcompete fossil fuels as production capacity ramps up.

It's safe to say that the success of the global green transition hinges on the electrolysis of green hydrogen scaling up to meet the commercial demand. 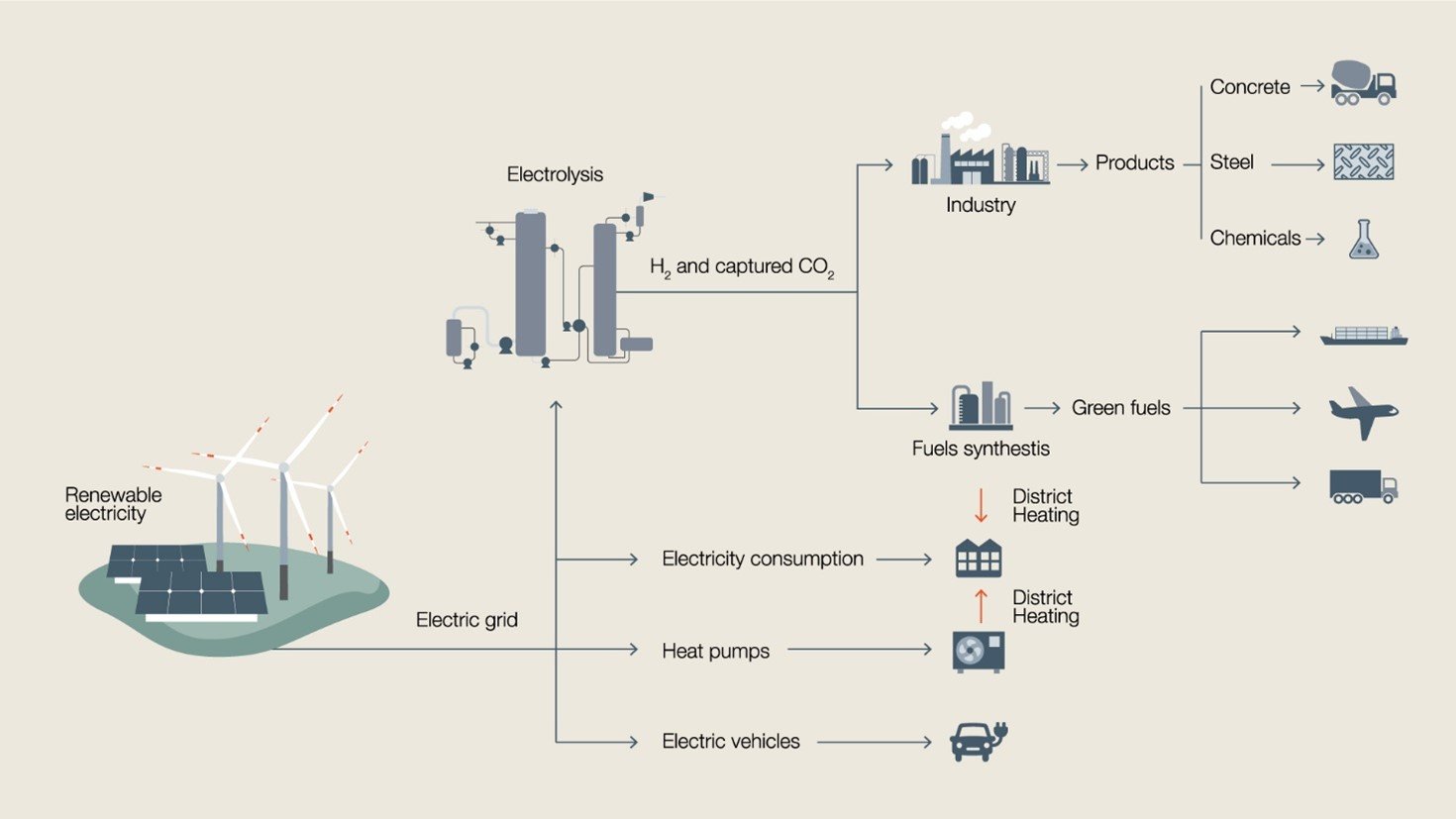 An overview of the technology pathways involved in the green hydrogen and Power-to-X value chain.

THE CHEMISTRY AT PLAY

An electrolyser unit works by making use of two reactions which take place at two electrodes – the negatively charged cathode and the positively charged anode – when voltage is applied. The Oxygen Evolution Reaction (OER) produces oxygen at the anode, and the Hydrogen Evolution Reaction (HER) produces hydrogen at the cathode. An electrically conductive substance, known as an electrolyte, is used to equalise the charge of the gases produced, while a membrane keeps them separate, preventing mixing and contamination.

At present, there are three electrolysis technologies considered to be commercially viable. These are: alkaline electrolysis, solid oxide electrolysis cells (SOEC) and polymer electrolyte membrane (PEM) electrolysis. Each technology has advantages and limitations, but they all have an important role in the scaling up of green hydrogen production. 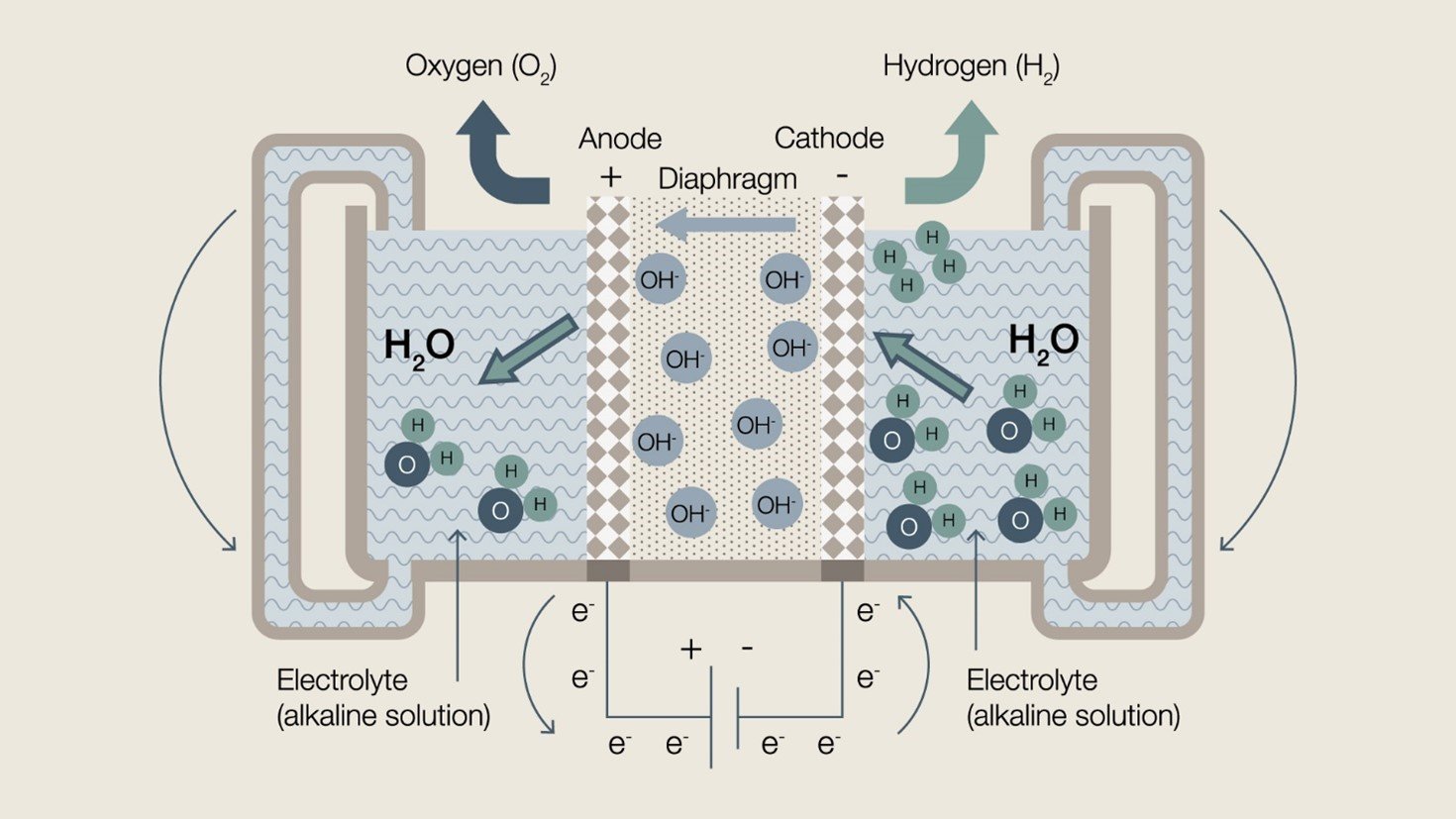 Anders Rønne Rasmussen, Research and Development Manager at GHS, outlines the benefits of their modular, scalable approach."We supply our customers with a standardized turnkey solution, which includes a core electrolyser module, power supply, water treatment, cooling systems and nitrogen," he says. "It also includes hydrogen purification, to ensure that the gas is ready to be used directly in fuel cells."

One of the present challenges for alkaline electrolysis to overcome is the corrosive liquid electrolyte, which can impact a systems lifetime. According to Anders, "the main area where we see degradation is at the electrodes. The electrodes we use are robust, but the alkaline environment is highly corrosive. We must carefully select the right materials for not only the electrodes but also the vessels, valves, pipes and other elements. This is particularly important as we intend to raise the operating temperature to increase the efficiency of our systems." The GHS electrolysers are designed to have a lifetime of 20 years, however changing the electrochemical cells in the stack every 10 years will allow the system to maintain peak performance.

SOEC is a less mature technology than alkaline or PEM electrolysis, however it is essentially the reverse of a solid oxide fuel cell (SOFC). SOEC's are a three-layer solid structure, composed of a porous cathode, electrolyte and porous anode, plus an interconnected plate. An SOEC system produces hydrogen via a ceramic solid oxide electrolyte membrane that selectively transfers negatively charged oxygen ions to the anode. SOEC is performed at very high temperatures, typically 700-1000°C, and the repurposing of thermal heat energy or waste heat can significantly improve the efficiency by reducing the need for electrical energy. 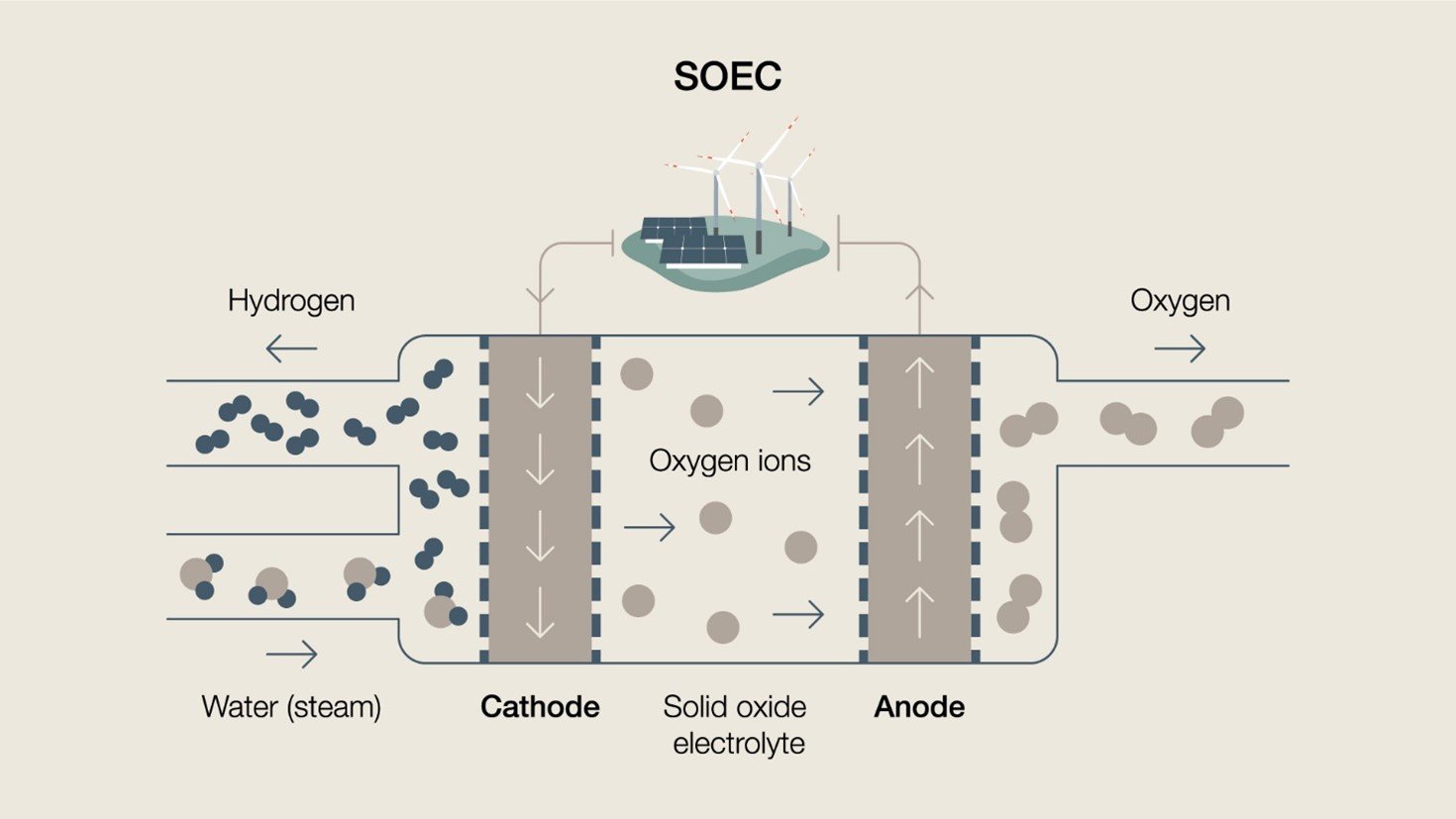 Henrik Lund Frandsen, Senior Scientist at the Technical University of Denmark (DTU), is their high temperature electrolysis technology track leader. He explains that while storing heat is cheaper than storing hydrogen, using excess heat is the key to making electrolysis much more efficient. "When efficiency improvements manifest themselves at a large scale the impact can be massive – think about cost savings on infrastructure or reducing the amount of land needed for renewable energy. This is truly something to pursue not just in terms of the economy, but also making our environment more beautiful," he says.

One technology provider working with SOEC's is Topsoe, a Danish Power-to-X (PtX) company headquartered in Lyngby. Topsoe stacks display 100% efficiency, which means that all thermal power and electricity which enters the system goes towards producing hydrogen. Topsoe's SOEC technology is also scalable and designed to integrate seamlessly with downstream PtX processes, such as green ammonia and methanol synthesis.

Peter Blennow, Senior Specialist and Principal Scientist at Topsoe, explains that the major upside of SOEC from their perspective is its excellent compatibility with downstream PtX production. "We have traditionally supplied downstream PtX processes for the chemical and refining industries, which we want to decarbonize," he says. "The production of ammonia or methanol generates heat, and we can reuse that to improve the efficiency of our SOEC system. SOEC also has the lowest MW/h requirement per metric ton of ammonia produced – lower even than fossil fuelled processes."

An area where SOEC is commonly thought to need further improvement is its vulnerability to degradation from the high operating temperatures. SOEC also operates best under a constant load, which can pose a challenge to integration with renewable energy. However, this is a myth Peter is keen to bust. "Rigorous testing of Topsoe's SOEC stacks at DTU showed the ability to follow a wind profile, both in regard to flow and current fluctuations, without any impact on degradation," he shares. "We are doing a lot of work to understand the performance of our cells, and we are now down to 0.5% system degradation per 1000 hours of operation."

PEM electrolysis is another mature technology, which splits water under acidic conditions using a sulfonic acid polymer as the electrolyte. The main advantage of PEM is its ability to operate effectively at high current densities and variable power levels within seconds, and it pairs well with renewable energy. Other characteristics include low gas permeability, high energy efficiency and a fast rate of hydrogen production. 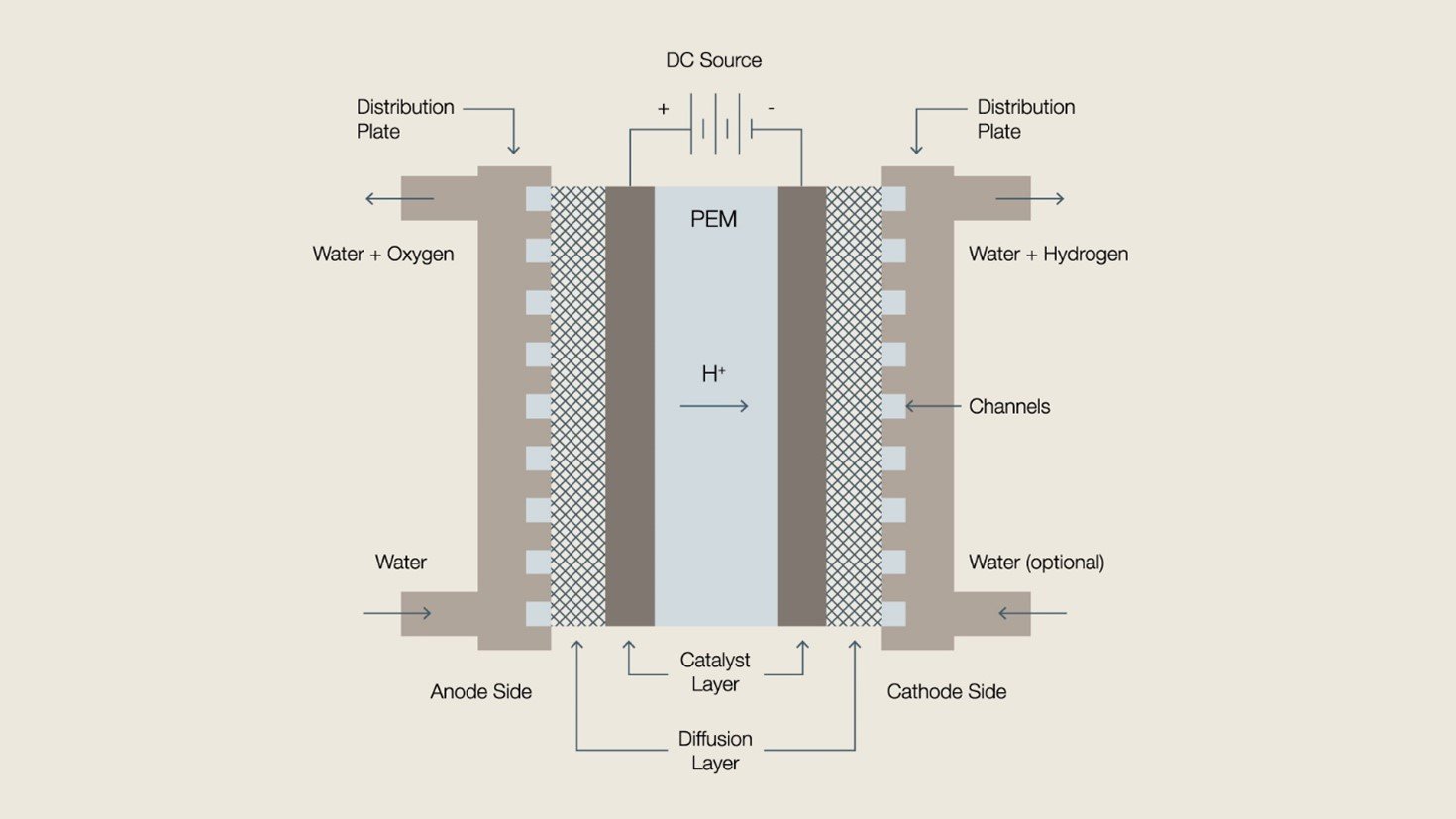 The most significant challenge facing PEM electrolysis is the systems acidity, which means very scarce and costly noble metals are required for the electrocatalysts and coating layers. These materials significantly increase the capital costs of a PEM plant. Platinum and iridium, some of the scarcest metals on Earth, are benchmark materials for the electrocatalysts in a PEM system, while porous transport layers and separators made with titanium outperform less costly materials like steel or nickel.

Presently, there are a few ways for PEM systems to try and tackle this limitation. These are: recycling materials as much as possible; reducing the amount of metals required by coating the electrode surfaces with a very thin layer; trying to squeeze more production out of existing electrolyser units; and trying to find alternative materials. Identifying low-cost substitutes for noble metals is a major area of active research, and could lead to a resurgence in the technology.


SCALING UP TO MEET DEMAND

While the three technologies differ in some profound ways, each has a role to play in the global green transition, and scaling up the capacity of all three, as well as new emerging alternatives, is of vital importance. The demand is evident: The International Energy Agency (IEA) expect global electrolyser capacity to reach 17 GW by 2026, up from just 0.3 GW in 2020, and there is already a global project pipeline of more than 300 GW.

One important contributor behind scaling up is, of course, price. Hassan Modarresi, Senior Project Manager and Lead PtX Specialist at COWI, explains. "There are two main contributors to the Levelized Cost of Hydrogen (LCoH) – one is the cost of electricity, which contributes around 70%, so the first step is to bring down the cost of renewable energy feeding into the system. The other, capital expenditure of the electrolyser, requires the upscaling of production facilities. I would estimate 7 to 8 years from now we will reach an economy of scale, and see the desired amount of less than USD 0.02 per kWh of electrolysis." 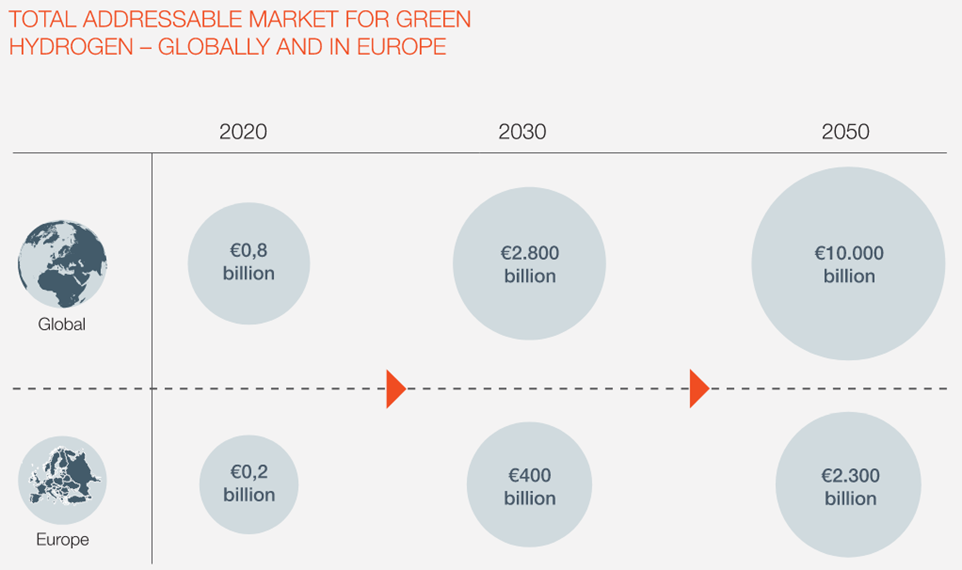 In March 2022, a broad majority in the Danish Parliament agreed on a new national strategy for PtX, allocating DKK 1.25 billion to scale up electrolysis and green fuel production in Denmark. The strategy is designed to both fight climate change and establish Denmark as a leading exporter of green hydrogen and green fuels. The government's target is to build 4 to 6 GW of electrolysis capacity by 2030, which would make Denmark one of Europe’s top three green hydrogen producers.

But Denmark is not alone in this ambition. Other European countries are also investing heavily in their own plans. "In France an electrolysis company is poised to receive EUR 200m from the French state to pursue SOEC, while in Germany a company working with pressurised alkaline technology is receiving EUR 60m," Henrik remarks. "I hope many of the demonstration projects here in Denmark will feature Danish electrolysers, but companies here will need more state support to compete with international players." 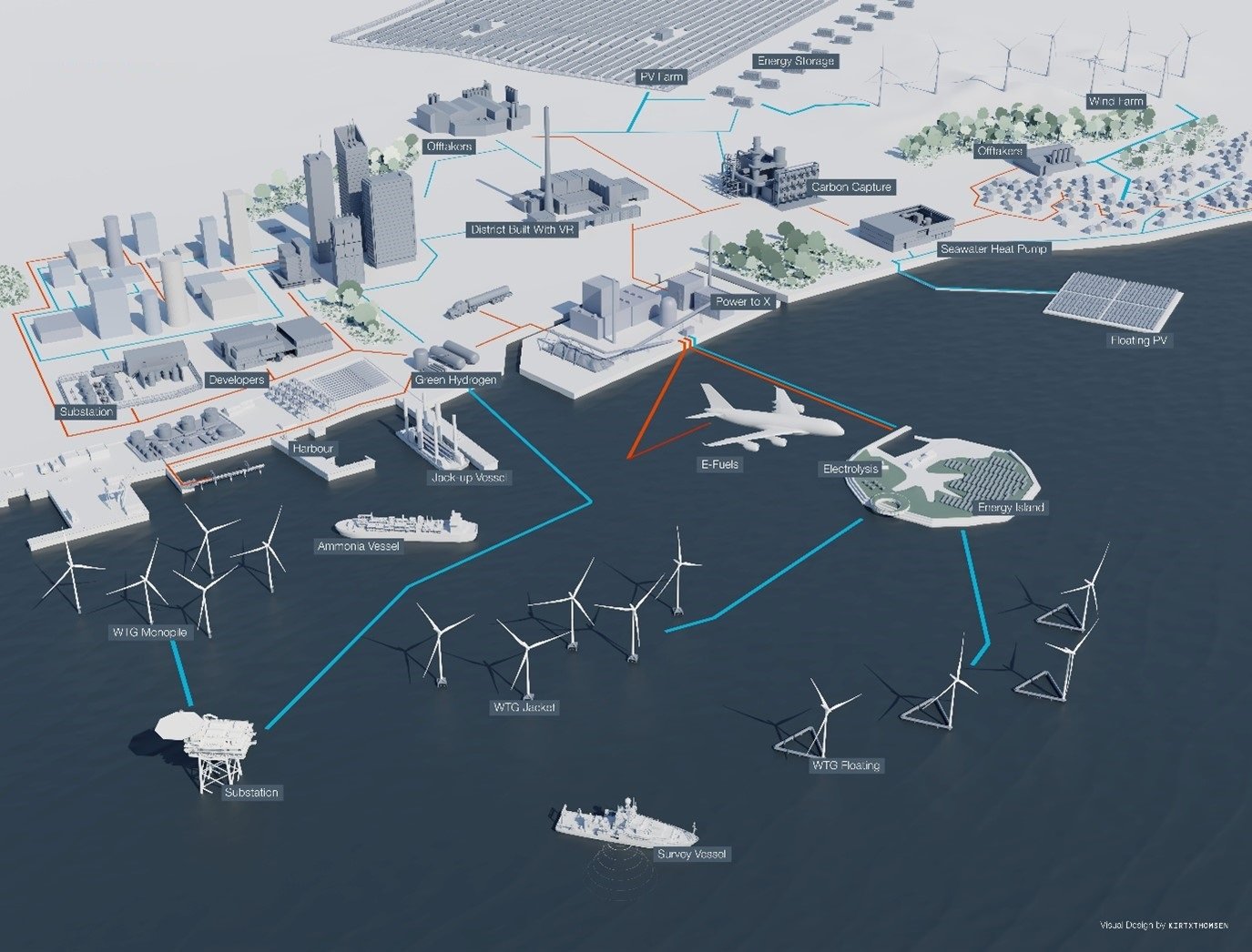 COLLABORATION IS THE KEY

While there may be some competitiveness between countries to reap the rewards of being a frontrunner in green hydrogen, it's important to reiterate that the three main electrolysis technologies are not in direct competition with each other. Each technology can fill certain niches, for instance SOEC's suitability for integration with downstream PtX processes, or the fact that alkaline is the most obvious candidate for integration with offshore wind turbines to produce hydrogen at sea. "All of us who work with green hydrogen here in Denmark should try to support each other," says Henrik. "I think it would be great if we can form a common Danish movement, and replicate our successful wind turbine adventure together, but this will require us to collaborate internally."

Hassan echoes this sentiment. "As a conservative forecast, electrolysis is supposed to grow to 1,350 GW by 2050, vastly higher than today’s capacity of 0.3 GW. There is room for everyone to play, even emerging technologies. There will be niche markets for each electrolyser and those niche markets will be huge. It's always in our best interests to collaborate and learn from each other," he concludes.

The electrolysis and green hydrogen value chain is still a young field. Scaling electrolysis capacity to where it needs to be, and integrating green hydrogen into a flexible, efficient energy system will require all players involved to co-create and continue sharing knowledge. 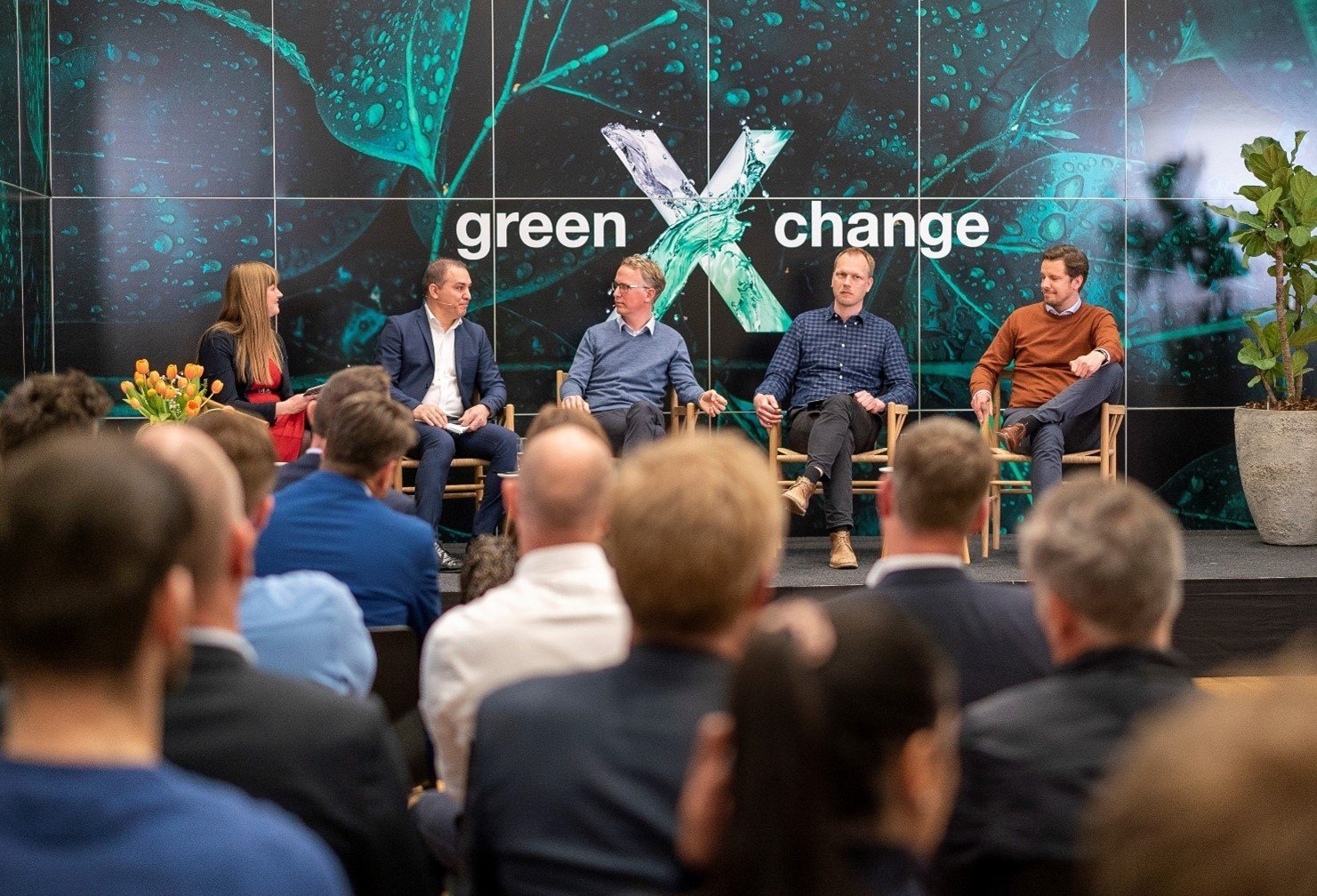