In recent decades, rail surface defects have evolved dramatically all over the world. This has multiple negative consequences, including significantly increased costs, and poses a threat to the aim of massively increasing the use of public transportation as a key factor of the green transition. This article deals with how to reduce costly surface defects and extend rail lifetime by implementing an efficient rail maintenance strategy.

Infrastructure managers globally are struggling with how to extend the lifetime of rails, particularly by reducing surface defects – so-called rolling contact fatigue (RCF). According to Carsten Jörn Rasmussen, Track Engineer and Senior Specialist, Railways and Metro in COWI, the problem has evolved dramatically in the past two or three decades, working against the green transition.

“Rail is a climate-friendly mode of transportation that plays a still more important role in the green transition due to increased electrification, new signalling systems and greener trains. However, a development with higher costs from replacing damaged rails will delay the transition to greener and more cost-efficient public transportation and will increase CO2 emissions. Furthermore, the problem affects punctuality, noise and railway safety,” Rasmussen says, stressing the need to increase awareness of how to reduce the prevalence of defects in rails and extend lifetime.

Scientists, consultants and rail experts at infrastructure companies worldwide are currently investigating rail surface defects issue in pursuit of knowledge and solutions. And according to Carsten Jörn Rasmussen, there are typically no simple answers as defects are often caused by a complex combination of factors.

Rail reprofiling activities such as grinding and milling are today a widely used and important parts of the maintenance strategy with the purpose of limiting the extent of rail surface defects. Especially grinding has become more widespread worldwide in the past two or three decades. In the same period, harder and more wear resistant rail steel grades have increasingly been installed to prevent the accelerating number of rail defects and extending rail lifetime.

When an extended use of a rail reprofiling regime is part of the maintenance management, the following important strategic questions arise, and the answers sum up the necessary reprofiling strategy, says Rasmussen:

He states that strategies for rail maintenance including rail reprofiling can be split into several different approaches as shown in the table below.

According to Carsten Jörn Rasmussen, the conventional approach to rail maintenance can be characterised as a reactive strategy as it was done in the past with no or very limited preventive reprofiling of the rails.

“In this approach, rail defects evolve to a level until safety critical thresholds are reached and the rails must be replaced, or occasionally repaired by arc welding. With the evolving number of rail defects in general, this strategy alone is the most costly and unsafe way to maintain rails today,” Rasmussen says, and he continues:

“The costs of replacing or repairing rails typically still represent the biggest part of the maintenance budget for infrastructure managers today, which shows a massive potential for improvements such as implementing more efficient monitoring and reprofiling strategies.”

The condition-based strategy is based on monitoring the rail surface quality and removing detected surface defects at an early stage by rail reprofiling – this requires efficient and comprehensive monitoring of the rail surface condition. Several measuring methods are available, including eddy current, wear, imaging, noise and corrugation. Another important input to a condition-based strategy is rail asset data such as rail age, rail profile, rail hardness, curves, traffic load, speed and axle loads. 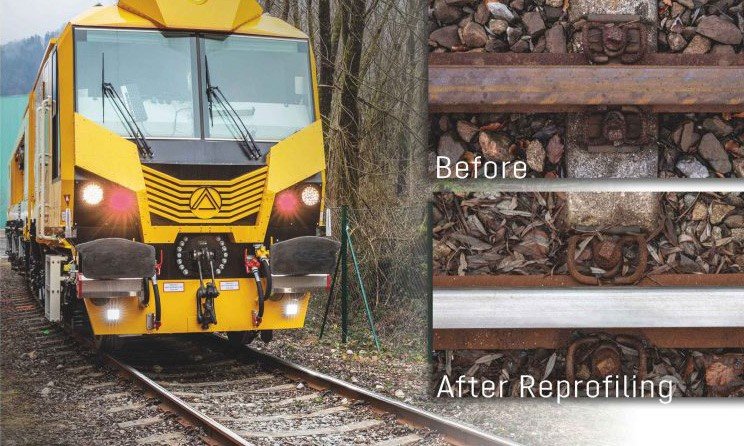 According to Carsten Jörn Rasmussen, a condition-based strategy should, as a prerequisite for making the optimal economic decisions, include calculations of the remaining lifetime of the rails, as well as the costs of reprofiling compared to costs of replacing rails, section by section. And the reprofiling process can be either grinding or milling. The two reprofiling methods come with a range of advantages and disadvantages and both technical and economic aspects should be considered.

“With the milling process, a significantly greater removal of the railhead per pass is possible. The grinding process is more flexible in regard of the rail profile. Aggressive grinding sometimes leaves deeper heat-affected grinding marks, which has a negative metallurgical effect on the rails, especially for harder rail steel types. But since the purpose of condition-based reprofiling is to remove detected rail surface defects, it often requires relatively significant removal of rail material, from one to five millimetres, and therefore milling is normally the most efficient process for this purpose.”

The preventive reprofiling strategy is based on cyclic reprofiling of the rails at fixed time intervals and relatively little removal of the rail surface – usually from 0.1 to 0.5 millimetre. The frequency typically depends on traffic load and line speed. The main purpose of this strategy is to prevent surface defects from initiating and at the same time maintain a correct rail profile. There are a range of advantages as well as disadvantages related to this strategy.

“First of all, reprofiling everywhere will prevent some defects from initiating and thereby save maintenance resources. On the other hand, this strategy is a costly approach when it comes to both the grinding activity itself and because it leads to reduced rail lifetime due to metal removal. Furthermore, using a simple strategy – like reprofiling for every 15 MGT (mega gross tonnes) in curves and for every 30 MGT on straight tracks – will result in many track sections with too much or too little reprofiling. For these reasons, a predictive reprofiling strategy is very attractive,” says Rasmussen.

The predictive reprofiling strategy is based on predicting where rail reprofiling is needed to prevent surface defects from initiating. The main purpose of this strategy is to reprofile only where it is needed – not too much and not too little – and at the right time to maximise the lifetime of the rails.

“This strategy requires knowledge about rail degradation mechanisms. Different kinds of surface defects exist, like head checks, corrugation, squats and other types, and they propagate differently. To support such a strategy on a specific line, section by section, it is useful to have empirical data of where defects were previously occurred and how the rails were maintained and/or reprofiled in the past,” Carsten Jörn Rasmussen states.

THE RIGHT COMBINATION OF MAINTENANCE ACTIVITIES

Concluding on the best possible strategy for rail maintenance, Rasmussen points out that the ideal solution often is a combination of reactive, condition-based and predictive maintenance, the latter having the greatest efficiency. The most important aspect is to have a model for efficient predictive reprofiling that prevents as many surface defects as possible from initiating while at the same time limiting reprofiling activities. The trick here is to only reprofile when and where it is needed, he points out.

Rasmussen adds that even with an efficient combination of predictive and condition-based reprofiling, it must be expected that some costly repairs of the tracks will be needed. The aim is to limit repair and replacement of rails due to surface defects as much as possible and instead extend the lifetime of the rails. If the surface defects can be reduced by 75 per cent using predictive reprofiling, and an additional 20 per cent by condition-based reprofiling and the last five per cent by reactive repair or rail replacement, he would describe that as a very successful strategy.

Rasmussen underlines that data-driven models and strategies for predictive and condition-based reprofiling depend on the properties of the specific lines, conditions and traffic loads, and access to knowledge and reliable data is crucial if this strategy is to succeed.

“To exploit all relevant data from a range of different sources in an efficient way, especially for predictive and condition based reprofiling, a linear asset management (LAM) system is required. LAM systems such as IRISSYS, OPTRAM or ZEDAS are developed to gather all data in a railway network in one system, which makes it possible to coordinate data and, among other things, identify correlations. A LAM system is a fundamental tool in achieving an efficient data-driven strategy for predictive and condition-based maintenance, especially for rail reprofiling,” he says.

Rasmussen emphasises that future mobility must be sustainable. A key factor is initiating a sustainable transformation of public transportation. In Denmark and many other countries, billions have been invested in having railways play a leading role in the green transition of transportation. And the ability to extend rail lifetime is an important part of achieving this goal.

“Rail production requires a huge amount of energy, causing very high CO2 emissions. The emissions from production of one kilometre of rail are estimated to be 136 kg CO2e. By implementing an efficient strategy for rail maintenance, it is often possible to increase rail lifetime by 50-100 per cent, resulting in a corresponding reduction of CO2 emissions due to the reduced need to produce new rails. An extended rail lifetime therefore benefits progress towards a more sustainable world,” Carsten Jörn Rasmussen concludes.

Before he joined COWI as a rail expert, Carsten Jörn Rasmussen was Technical System Responsible for rails in Banedanmark for 12 years – a part of the Ministry of Transport in Denmark. In the above insight, he shares his experiences with maintenance of rails and possible strategies in this context. During Carsten Jörn Rasmussen's employment at Banedanmark, safety critical and operationally disruptive rail defects were reduced by more than 80 per cent by improving management of the rail defects. In COWI, Carsten Jörn Rasmussen works as a consulting rail expert, especially within data-driven rail maintenance.