Denmark’s new cable-stayed bridge is the result of close collaboration between architects and engineers and connects the upcoming sustainable district “NærHeden” with the neighboring town to the joy of pedestrians, cyclist and drivers alike.

One September night in 2019, a steel structure weighing almost 300 tonnes was carefully lifted across one of Denmark’s most busy railway sections some 30 km outside Copenhagen.

That feat was preceded by months of engineering and architectural work, including the preparation of a highly accurate parametric 3D model, which allowed for design adjustments during the design phase.

Since construction began in February 2019 work had gone at full speed from day one. Both on the concrete substructure on either side of the railway, and on a parallel fast start of steel workshop production partly in Poland and partly in Denmark. On 27 March 2020, the cable-stayed bridge was opened to local road users and it now links a new and an old district at Hedehusene in Høje-Taastrup Municipality.

Boasting a 28-metre high pylon and a 42-metre span, the cable-stayed bridge is meant to be an architectural landmark for the new NærHeden district, which is being developed as an example of tomorrow’s sustainable suburb, featuring high-quality infrastructure and urban spaces. Community was a top priority for the suburb, which incorporates common areas and shared facilities.

The local authority, Høje-Taastrup Kommune, knew from the start that a bridge would be essential to meet the demands of the new suburb, and the new vehicle and pedestrian bridge now allows for optimal traffic connections between the new suburb and the already existing municipality, Hedehusene.

The wish to secure a striking landmark for NærHeden also led to the decision to build a cable-stayed bridge, rather than a more traditional, flat and less costly concrete bridge.

COWI is an expert on complex bridges and multidisciplinary projects, and for the Nærheden bridge, we joined forces with bridge experts at architectural firm Dissing+Weitling. As sub-consultant to COWI, they developed the bridge geometry and assisted in giving the bridge its light and slender appearance, which is perceived differently, depending on your vantage point.

The architects were involved in both the idea phase, the detail design and execution phases in order to ensure that the desired architecture was prioritized and COWI did detail design in 3D to handle the complex geometry and to specify and support the creative ideas with statics calculations. 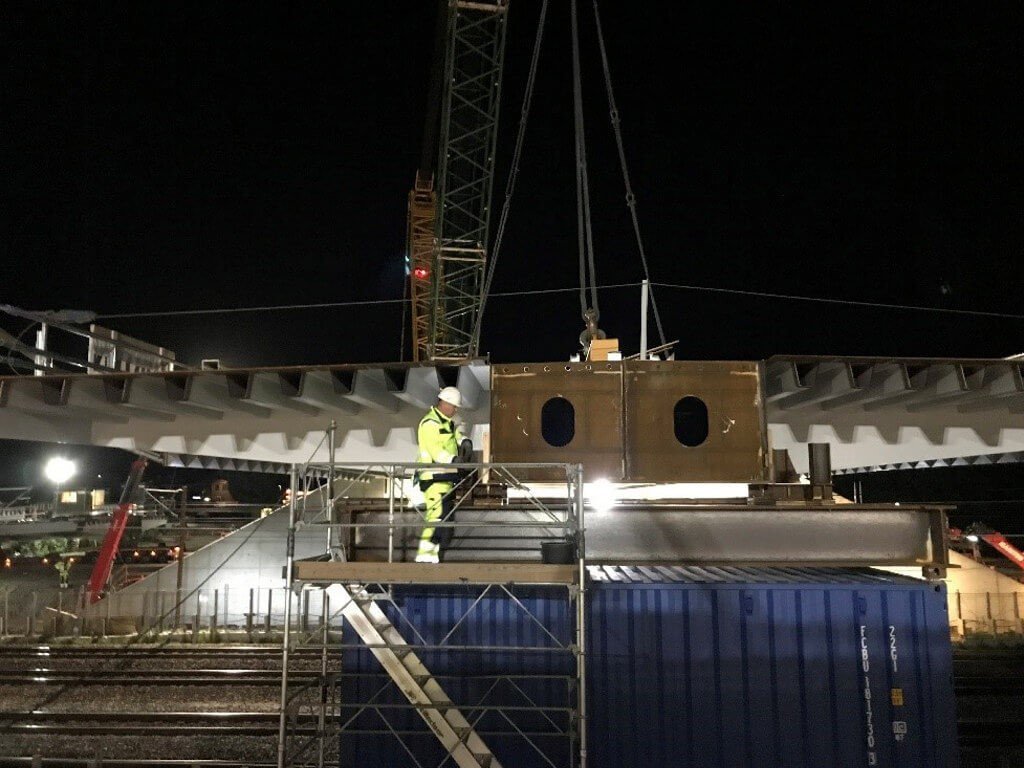 The main contractor Jorton A/S teamed up with a number of sub-contractors and foreign suppliers since not all design solutions were available in the Danish market. For instance, cable stays and lighting were manufactured by Italian specialists and crash barrier mesh frames from Taiwan.

The result is a striking and somehow mystifying spectacle of crossing cables and the characteristic sloping pylon where the bridge deck is suspended from the delicate cable stays. In addition to providing suitable lighting for the many expected road users and pedestrians on the bridge, the lighting aims to light up structural elements and enhance the beautiful architecture in the dark.