Organisation of the cowi group

The Group’s parent company, COWI Holding A/S, is an unlisted Danish public company owned by COWIfonden (the COWIfoundation) and present and former employees.

COWIfonden is a commercial, independent foundation holding a majority of the shares in COWI Holding A/S.

The object of the Foundation is to create a stable basis for COWI Holding A/S and to support research and development relating to Danish engineering. COWIfonden supports the COWI Group in accomplishing its vision, securing competitiveness and good financial results.

According to the foundation instrument, the COWIfonden is to retain its controlling interest and to ensure that COWI keeps its financial independence through self-financing, employee-financing or by injection of external capital.

In connection with capital increases in COWI Holding A/S or mergers with other companies the Foundation may give up its position as holder of the majority of shares in the company, if necessary in order to retain and develop the commercial activities as a competitive business at an international level.

COWIfonden holds approximately 87 per cent of the share capital of COWI Holding A/S, including all A shares. (May 2022)

Other shareholders of COWI Holding A/S

Approximately 13 per cent of the share capital of COWI Holding A/S is held by present and former employees of the COWI Group. (May 2022)

COWI wishes to offer shares to the Group’s employees every year in order to achieve a broadly based co-ownership among employees. At the moment the shares are being offered in eight countries. 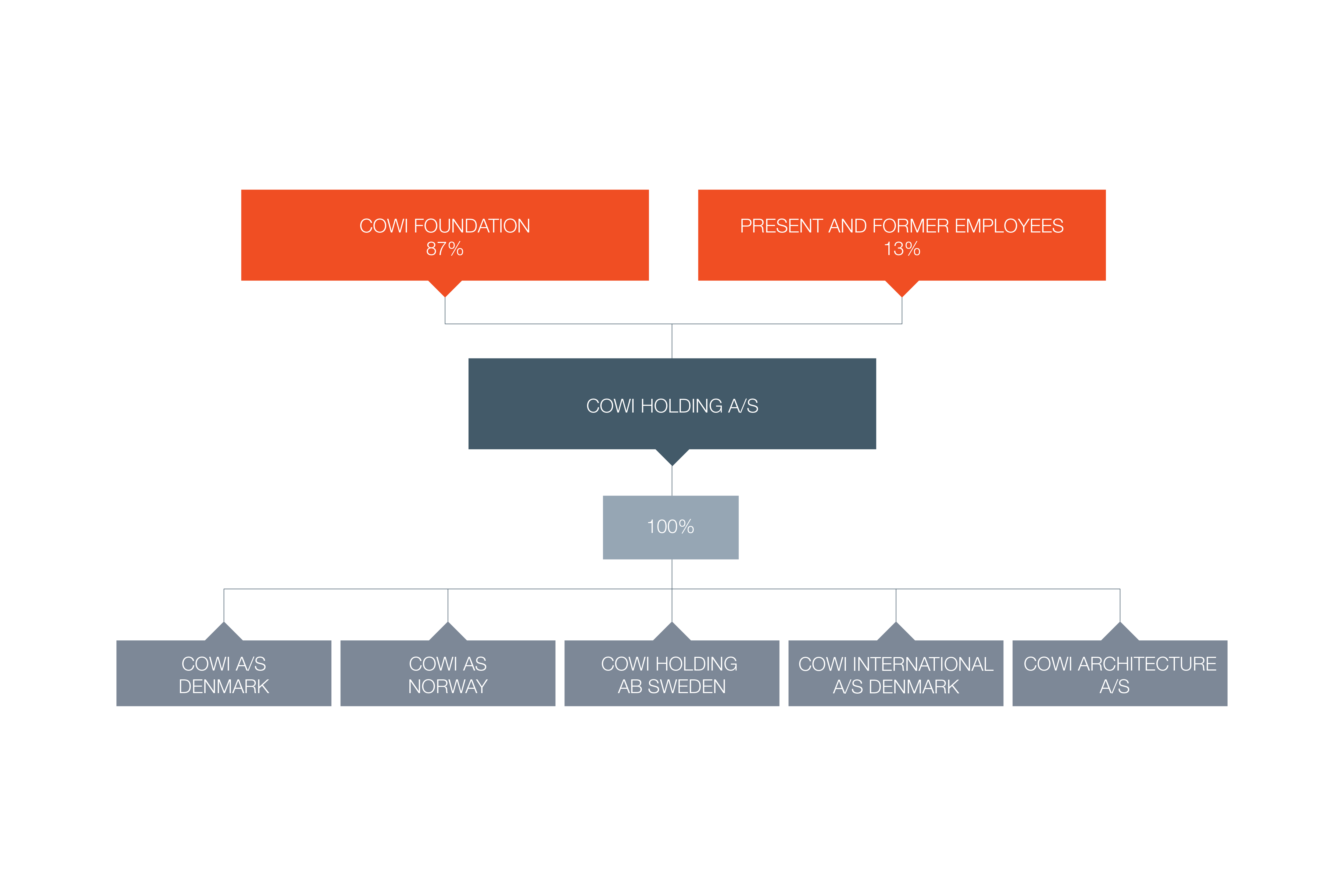 COWI Holding A/S is the Group's holding company, established in 2010, and owned by the COWI Foundation and COWI employees. COWI Holding A/S in an unlisted Danish public limited liability company.

The involvement of COWI employees in the circle of owners is an important part of COWI's strategy.

We believe that employee ownership will increase cooperation within the COWI Group and strengthen coherence between performance and the employees' competencies and efforts.

In short, having employees in the circle of owners is an important premise for COWI’s future success.

The COWI Foundation holds all A shares plus some B shares, approximately 87 per cent of the share capital. Employees hold approximately 13 per cent. (May 2022)

WHO CAN ACQUIRE SHARES?

Employees, management in COWI Holding A/S and COWI Foundation may acquire as many of the available B shares according to a sales offer as they wish, provided that no individual at any time can hold a total number of B Shares exceeding a fixed limit of 0.5% of the share capital issued in COWI Holding A/S.

Annually, in connection with the opening of the share trading window, current and former employees will receive an email with a link to the shareholder portal.

Shareholders may sell the B shares each year in the annual share trading window (within 4 weeks after the annual general meeting) and there is no period of commitment before it is possible to sell. However, local variations and/or legal requirements may be applicable in some countries.

If the shareholder's employment with the COWI Group is discontinued, the shareholder is under an obligation to sell back B shares in the first coming sales window (within 4 weeks after the annual general meeting). However, in certain instances former employees may keep the B shares for an additional three year period. (Learn more by reading Terms for possession of B shares under Read More.

The content of this web site is made available as a service and for information purposes only. While we have attempted to maintain the information as accurate as possible, this general information about the COWI Share Programme does not replace, amend, alter or in any other way modify the terms and conditions set out in the Terms of possession of B shares or similar terms or conditions as individually agreed and accepted by the shareholders as part of the acquisition and/or possession of shares.