The future of infrastructure and robotically printed self-sensing cement

For the everyday person, wearable technology, such as Apple and Garmin watches, are providing 24/7 data on everything from heart rate and fitness to efficiency of exercise, and quality of sleep. Not only are such innovations providing health data the likes of which we’ve never seen before, many are now generating actionable insights directed towards improving one’s quality of life.

For athletes, the technological innovations are even greater. For example, football players are now able to wear mouthguards that provide ongoing data to trainers off-field and alert them of any potential concussion risk.

Infrastructure is slowly moving in the same direction. Traditionally, a tunnel would be built according to pre-set, conservative standards and inspected periodically. Problems visible to the human eye – like cracks and leaks – would be addressed reactively, however given the limitations of visually inspecting a structure of which only a small portion is accessible, vast areas are typically left unmonitored.

Unfortunately, much like in the human body, it is often the sections of a structure not immediately visible that may be slowly, sometimes irreversibly degrading. Tunnel lining segments covered in water and soil, once built, are rarely inspected thoroughly again unless a problem is plainly evident, in which case acoustic testing may be implemented to delve beneath the surface. 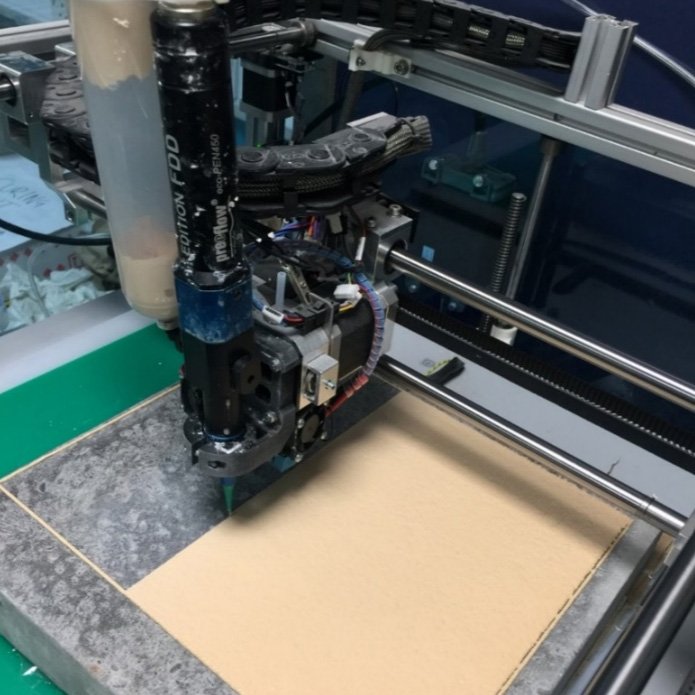 Sensors are one way that asset owners can gain early insights into the health of their assets providing the opportunity for potential issues to be mitigated before they arise. However, current technologies have a high failure rate and are disruptive and expensive to install once the project is built. Recognising the value sensors can bring to infrastructure maintenance, COWI is working with the University of Strathclyde and National Highways to innovate the technology with robotics.

The project involves the development of wireless sensor modules and printable self-sensing cements which can be deployed flexibly and repeatably within and on the surfaces of segments using a six-axis robotic arm.

Toolpaths for the deployment are scripted ahead of time, so that once the robot has configured its position relative to the segment mould, it can repeatably deposit sensors in a preconfigured location, recording its actions and its errors more consistently and traceably than a human operator. This will mean that the particular robotic methodology used to deploy the sensors can later be statistically linked to final sensor performance values. In other words, because the robot remembers and records its actions as saveable data, we can quantify the links between an installation approach and the quality of the job. The approach is compatible with carousel processes for producing segments, as these already have a relatively high level of automation.

In contrast to existing manual methods, the automation of installation creates high repeatability as well as being modular and flexible – making it cost-competitive to pursue. Further, as the technique requires zero installation on-site, it minimises interference with the construction process, helping to optimise schedule and budget. Collecting data from day one, the sensors will be central to maintaining and improving the structural health of the tunnel over time, monitoring its shape at different heights and thicknesses through the concrete, and generating insights into stress loads, or changes in shape, like ovalisation, which can occur naturally over time or as a result of nearby groundworks.

The concentration and pattern of sensors can be fully tailored to ground conditions. More sensors can be put in areas of high stress concentration; for example, more sensors could be placed in the cross passages between two tunnel bores, as they tend to be stress hot spots. Other areas that might call for more concentrated sensor placement include spots where ground conditions might be more adverse, or where there are potential developments anticipated to take place above or around the structure.

In the ever-expanding City of London, for example, there are always new extensions being made to underground lines or other major tunnels (communications, water etc) around the city. Having sensors in place can pre-empt those anticipated changes and alert the asset owner to any additional strain being placed on the structure as new developments occur. The same can be said for changes due to climate change. As climate change creates new environmental stressors, sensor data can monitor the impact and flag any early warning signs.

Over the lifetime of the asset, the owner will be able to streamline the number of visual inspections required, which will produce a cost saving and reduce disruption to tunnel users. Similarly, by having a greater depth of understanding over the inspections and potential maintenance that is required, asset owners can plan activities during quieter times. The sensor data will also help improve the asset’s resilience – in the case of an incident, the data collected before, during and after will help the asset owner better understand the cause, the impact and the remedial works required.

“This type of research is an important step towards our digital roads operational capability ambition, that brings robotics' into the construction and deployment of sensor technology, that will provide real-time information and environmental data that will enable us to pre-emptively prepare and respond more efficiently.” said Phillip Proctor, Head of Research for National Highways.

Advancements in technology such as this can also be used to validate and promote new, more innovative designs. Because of uncertain ground conditions, the changing environment and the vital importance of safe, fail-proof structures, construction teams have typically had to make reasonably conservative design assumptions. This can place limitations on the ability of individual firms and the wider industry to reduce their carbon footprint, let alone meet government-mandated reduction targets.

Data insights captured by smart sensors have enormous potential to innovate the industry over the longer-term by enabling the gradual piloting of novel, low carbon materials in low-risk sections. For example, a project could use 99% proven material and pilot 1% with new lower carbon segments. The team could subsequently analyse the performance of the new material and decide whether to recommend its greater use in the future. In this way, construction firms can incrementally reduce their carbon footprint, and improve efficiencies and design innovations.

The world at large is shifting towards real-time insights and data-led decision-making. The power of data, technology and connectivity in improving how assets are designed, built, maintained, operated and used is a focal point in National Highways Digital Roads 2025 representing a step-change in UK transport infrastructure. A proactive, tech-forward approach to infrastructure maintenance is bringing the construction industry in line with its peers. Using robotics to install smart sensors is one of many examples of how reinventing a process can help save costs, improve resilience, reduce disruption, and enabling greater efficiencies in both the short- and long-term.

COWI is a leading international consulting group within engineering, economics, and environmental science. With offices across the world, COWI provides clients with innovative and sustainable solutions to complex challenges within infrastructure, buildings, environment, water, energy, industry, and planning.