Green hydrogen – the oldest element is creating a new world

Zero emission green hydrogen is increasingly seen as the fuel of the future, able to replace fossil fuels in a range of high emission industries and sectors. There is still some way to go before it takes over, but as global efforts to tackle the climate crisis intensify, our understanding of green hydrogen, and its sheer world-changing potential, continues to grow. Welcome to the dawn of the Hydrogen Age.

Floods, desertification, broken heat records, crumbling glaciers – every day it becomes more evident that climate change is an existential issue, demanding of us an unprecedented and coordinated shift towards new clean technologies.

The energy supply sector is the largest contributor to climate change globally, responsible for 35% of all greenhouse gas emissions. The International Energy Agency (IEA) predicts energy demand to rise 30% by 2040. Such an increase, if powered by fossil fuels, would make limiting global warming to 1.5 degrees C virtually impossible. It is clear we need to do things differently. This is where the humble hydrogen atom, the most abundant element in the universe, comes in.

A CLEAN ALTERNATIVE FOR CLIMATE COMMITMENTS

Hydrogen is an incredibly capable energy carrier, and according to the IEA global demand for it has increased threefold since 1980. Hydrogen can be categorised into four main variants: grey, brown, blue, and green. Grey and brown hydrogen, both produced by fossil fuels, are the most widely used variants and have high emissions profiles. Blue hydrogen is a low carbon alternative, with a fossil fuelled production process reliant on carbon capture and storage (CCS) technology to minimise emissions. 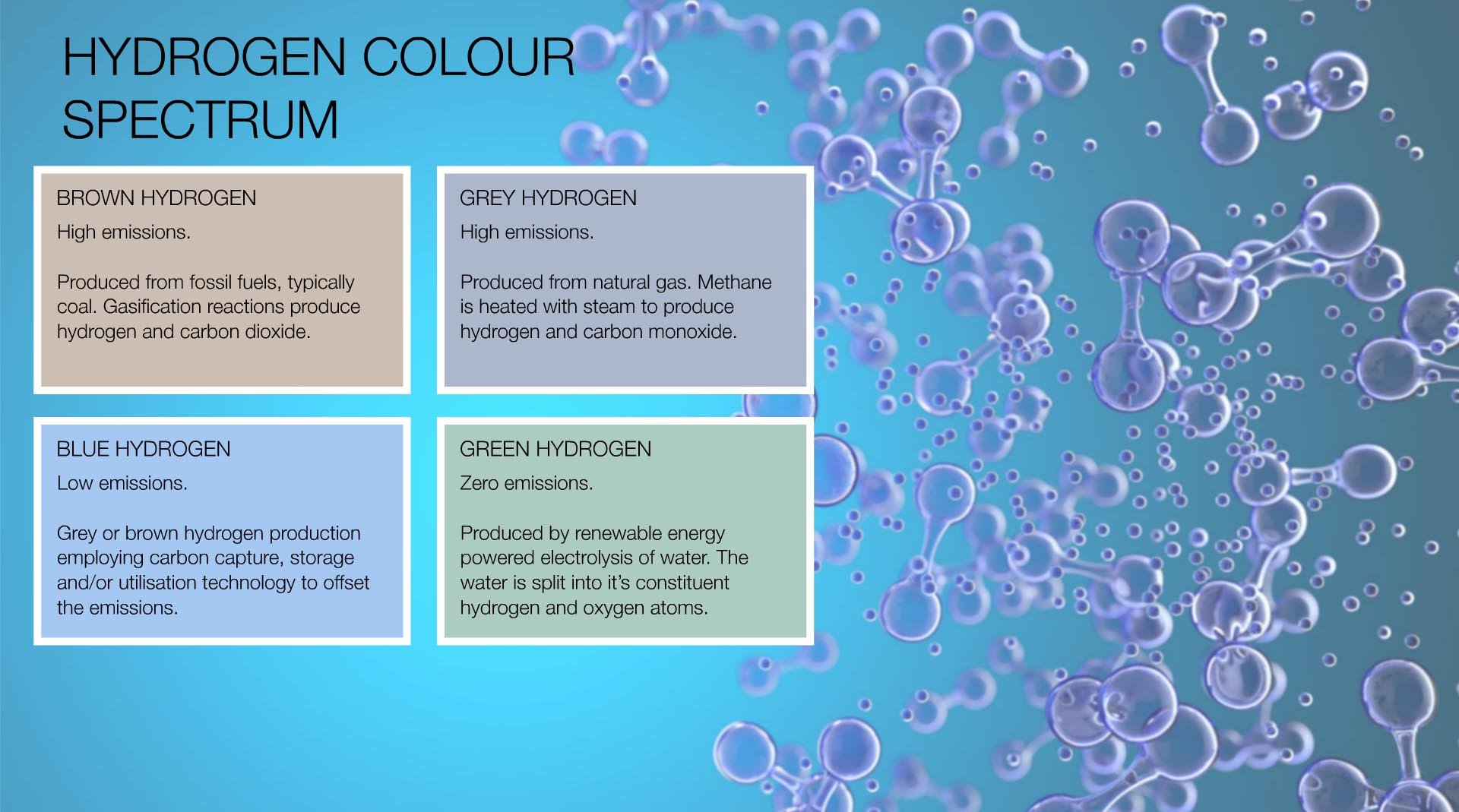 In contrast to the other variants, green hydrogen is produced by renewable energy powered electrolysis, which splits water molecules into hydrogen and oxygen. This process results in zero emissions, and the hydrogen produced is very pure. It can be transported and stored, helping to overcome the challenges of intermittency and demand fluctuations by acting as a battery for renewable energy.

Interest is booming, and green hydrogen is increasingly viewed as critical to meeting both future energy demands and the commitments of the legally binding Paris Agreement on climate change. As the era of hydrocarbons draws to a close, green hydrogen has the potential to become the world’s dominant transportable and tradeable energy medium.

A KEY TOOL FOR DECARBONISATION AND SECTOR COUPLING:

The versatility of green hydrogen means it can be harnessed by a huge range of technologies and industries and presents an opportunity for sectors struggling to decarbonise solely with renewable electricity. Steel, cement, agriculture, and transport are four sectors in particular for which green hydrogen will be critical for decarbonisation. Steel and cement both account for 8 % of global CO₂ emissions, while agricultural production and transport are responsible for a whopping 11% and 24% respectively. Decarbonising these sectors is, therefore, a matter of urgency.

Many industries considered difficult to decarbonise rely on consistent, extreme heat production that is unattainable with electricity. In a steel mill, furnaces run on coke produced from coal. Replacing the coke with hydrogen creates a process that emits only water vapour. Hydrogen can also be used to heat cement kilns which typically rely on natural gas. The ability of hydrogen to convert intermittent renewable electricity into a storable, steady power source makes it highly compatible with the needs of heavy industry.

In the agricultural sector, many nitrogen-based fertilisers like ammonia are produced via an energy intensive, high emissions process, with the hydrogen typically coming from methane gas (grey hydrogen). Green hydrogen can instead be combined with nitrogen from the air to produce zero emission green ammonia. In some instances, green ammonia can substitute for hydrogen as an energy carrier - for hydrogen produced in remote locations it is often more efficient to convert it into ammonia before shipping it to its destination.

A NEW ERA OF TRANSPORT FOR LAND, SEA AND SKY:

Much attention is being paid to how green hydrogen can best be integrated into transport systems. Electric vehicles (EV’s) can be charged either by a battery or via a hydrogen fuel tank, which uses fuel cells to convert the gas into electricity. Hydrogen derived synthetic fuels, such as methanol and kerosene, can be produced by combining green hydrogen with captured carbon. 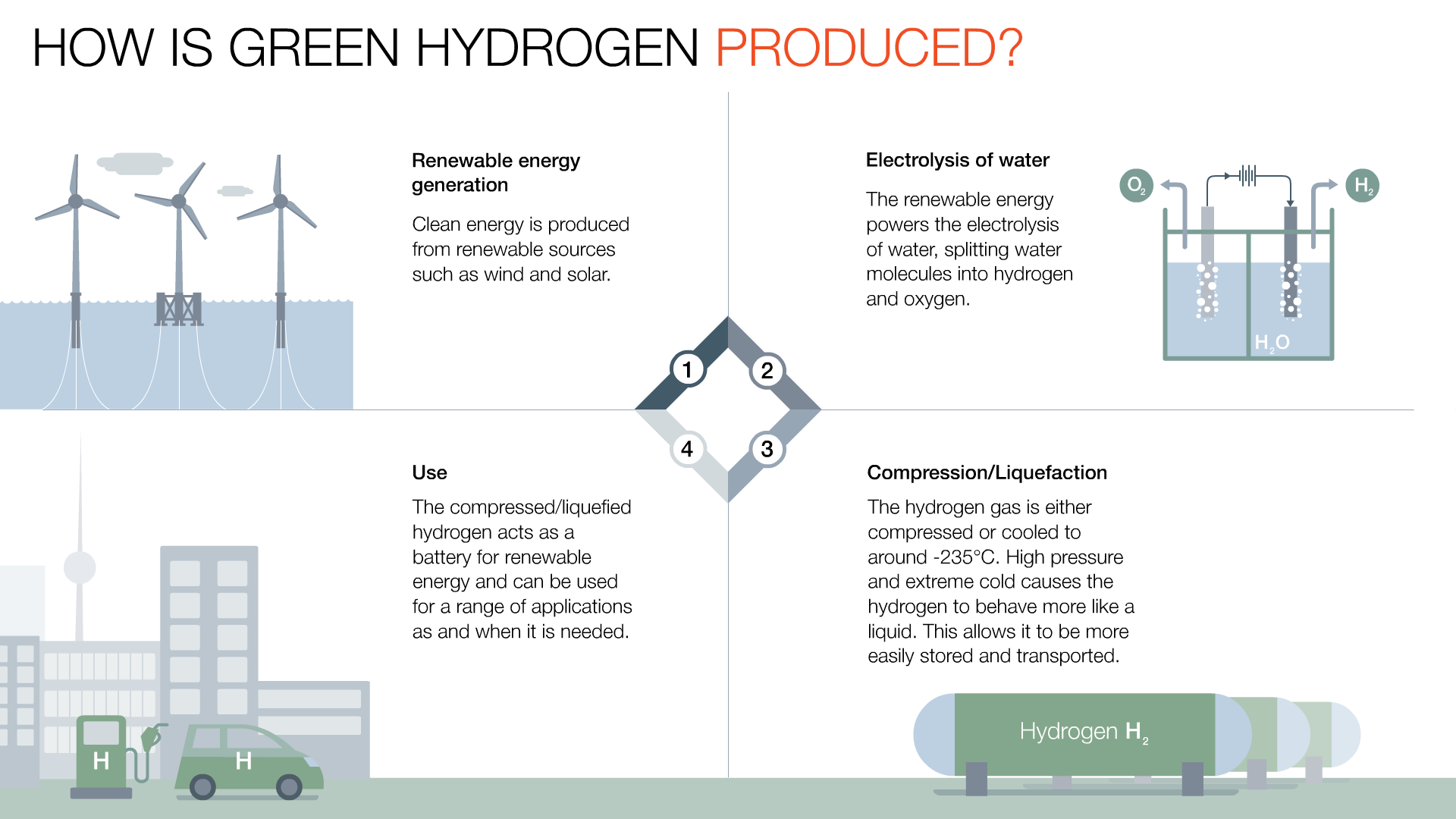 As well as being a solution for decarbonisation, green hydrogen is a linchpin in the concept of sector coupling. Sector coupling views all constituent parts of the energy system as fundamentally linked, allowing for the flexible usage, sharing and storing of clean energy across sectors. Captured carbon and green hydrogen can produce green fuels for transport, hydrogen can be used for industrial heating, and gas storage facilities can store renewable electricity as hydrogen. Furthermore, hydrogen production results in significant amounts of waste heat, which can be recycled for district heating. It is hoped that an output of high value products, such as clean shipping and aviation fuels, will continue to drive high investment in renewables.

COWI is highly focused on developing our green hydrogen expertise and project pipeline, in line with the ambitious national strategies in a number of our core markets. One example of this is the Green Fuels for Denmark project. COWI is a knowledge partner to Copenhagen Airports, A.P. Moller-Mærsk, DSV Panalpina, DFDS, SAS and Ørsted, developing ground-breaking new hydrogen and green fuel production facilities. The project will produce green hydrogen for busses and trucks, e-methanol for shipping, and e-kerosene for aviation. By 2030, it is expected that the project will have an electrolysis capacity of 1.3 GW, producing more than 250,000 tons of green fuels per year and reducing annual emissions by 850,000 tons CO₂.

COWI is the sole consultant and advisor for H2RES, a project led by Danish energy company Ørsted to refine wind powered electrolysis and hydrogen production. The demonstration plant will be powered by 2 offshore wind turbines and, with a capacity of 2 MW, is expected to produce around 1000 kg of green hydrogen per day from late 2021. The hydrogen from H2RES will be used for zero-emission transport fuels in Greater Copenhagen and Zealand.

Copenhagen Infrastructure Partners (CIP), a Danish investment company and close partner to COWI, are also developing a number of important green hydrogen projects. CIP plan to build Europe’s largest green hydrogen plant in the Danish port city of Esbjerg. The 1 GW electrolysis plant will use offshore wind to produce green ammonia for fertiliser and shipping fuel, with excess heat distributed to homes in the city. CIP estimate that the facility could ultimately save 1.5 million tons of CO₂ emissions per year.

We are now at a tipping point, between the era of fossil fuels and a renewable and green hydrogen powered future. New developments are frequently announced and based on current trajectories the United Nations Framework Convention on Climate Change (UNFCCC) have predicted that green hydrogen could meet a quarter of the global energy demand by 2050.

Hydrogen is a key focus of the European Green Deal, established in 2019 to make the EU carbon neutral by 2050. The hydrogen strategy within the Green Deal aims to establish a minimum of 6 GW of green hydrogen electrolysis capacity by 2024, rising to 40 GW by 2030.

Individual European countries are also investing heavily in their own plans. In 2021 France announced a strategy to boost electrolysis capacity to 6.5 GW by 2030, while producing hydrogen powered heavy vehicles and supporting research and innovation. Also in 2021, Germany announced EUR 8 billion of investments in 62 projects, aiming to install 5 GW of electrolysis by 2030 and build 1700 km of hydrogen pipelines. The Netherlands, a significant blue hydrogen producer, is now pivoting towards green hydrogen to meet its climate targets, announcing investments of EUR 440 million in new projects in 2021.

Another group with ambitious plans is the Gulf Cooperation Council (GCC). As demand for fossil fuels begins to wane, the GCC states are looking to secure their influence in the global energy market with green hydrogen. Other countries looking to become frontrunners in this field have published national hydrogen strategies, including Australia, Chile, Japan, New Zealand, and South Korea. 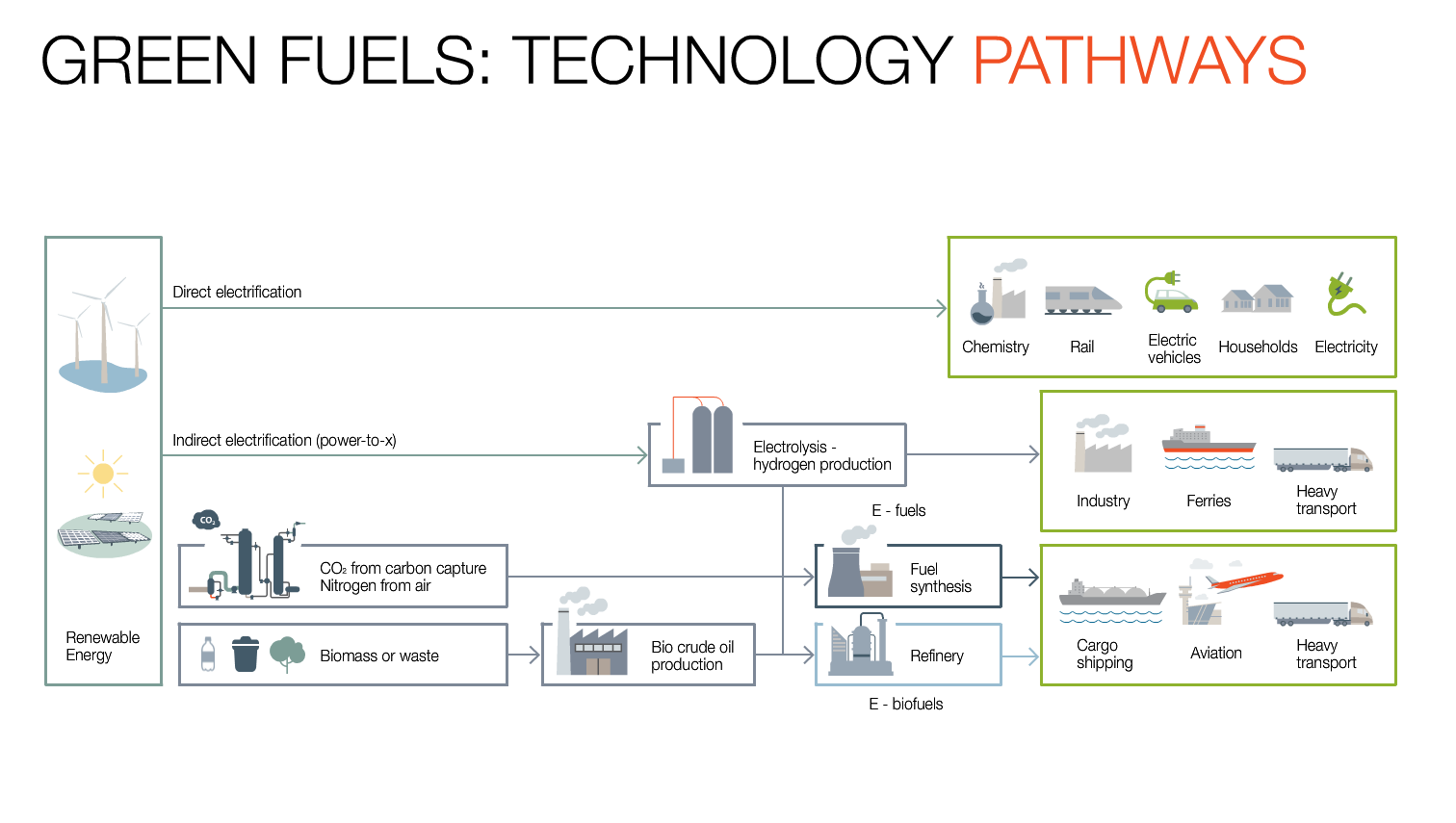 Demand for green hydrogen is expected to skyrocket in the coming decades. Projections from PwC anticipate demand reaching 530 million tons, equivalent to over 10 billion barrels of oil, by 2050. Yet while prospects look rosy, there are challenges to overcome. Price is seen as the main obstacle, as the costs of producing, storing, and using green hydrogen can be significant.

Green hydrogen currently costs between USD 3-6/kg, more than the USD 1.8/kg cost of grey and brown hydrogen. However, improved electrolysis technology and the development of an economy of scale will see prices fall significantly, with the International Renewable Energy Agency (IRENA) predicting green hydrogen prices of between USD 0.08-1.6 by 2050. Blue hydrogen, which costs USD 2.4 per kg, has been mooted as a low carbon transition tool for some markets, until green hydrogen becomes more commercially viable. It is suggested that USD 2/kg is the price where green hydrogen will become cost competitive in a range of sectors, including steel, concrete, agriculture and transport.

Technological readiness is often cited as a barrier, however the technology and science behind green hydrogen production is well understood. The widespread availability of cheap fossil fuels has acted as a historical disincentive to green hydrogen technology. Thankfully, this is no longer the case, with research and demonstration activities taking place all over the world, laying the foundations for cheap and abundant green hydrogen.

THE FUEL OF THE FUTURE

It is clear that the two major factors that will have the biggest impact on green hydrogen prices going forward are the decreasing cost of renewables, and an increased economy of scale. As more solar and wind power enters the energy grid over the next decade, electricity prices for electrolysis will eventually fall to the desired amount of less than USD 0.02 per kWh. Electrolyser costs have reduced by 60% over the last decade, and the Hydrogen Council expects prices to halve by 2030. Making green hydrogen a viable industry without subsidies requires continued strong investment, regulatory frameworks, burgeoning markets, research & innovation, and a robust infrastructure base.

Tackling a global climate change crisis is one of the foremost challenges of our time. Many of our old ways of generating energy are no longer fit for purpose and continuing to pursue high emissions technologies is an abdication of our responsibility for future generations. As the motivation to decarbonise, invest in and improve the energy sector grows, green hydrogen is poised to become the definitive fuel of the future.

I have over 20 years of experience in the energy sector, working with new energy technologies to drive the green transition. My areas of expertise are electrolysis, power-to-x and carbon capture, and I have an in depth knowledge and thorough understanding of green fuels, energy systems and sector coupling. I have worked as a process engineer and chief specialist on increasing the operational efficiency and flexibility of power plants, harnessing biomass for heat and power generation, carbon capture, biomass and coal co-firing, heat pumps, and the optimisation of industrial processes.