The Oslo study: How autonomous cars may change transport in cities

A shared fleet of autonomous passenger cars can shave off 90 per cent of today’s car population. However, car users will have to share more than cars; they will have to share rides as well. Otherwise, our roads will not be able to handle the traffic volumes.

Those are the main findings of a study carried out by COWI on behalf of Oslo-based transport authority Ruter. Furthermore, the study reveals the necessity of committing to strong public transit in a future with autonomous vehicles.

The technological development of autonomous vehicles and digital possibilities have brought attention to how future transport will unfold.

The concept of disruption has been used to reflect how the organisation of infrastructure and transport may be turned upside down. That could have huge ramifications for public transit.

In 2017, Norwegian transport authority Ruter, which provides public transit in the Oslo region, launched a study about the future’s transport system in light of the technological and digital development.

First, scenarios are established, based on a literature study. Second, consequences for the cityscape, traffic and transport users are calculated. The study also looks into a scenario with full phase-in of autonomous vehicles that transport users jointly use from a shared fleet.

Today, expectations for when large numbers of autonomous vehicles will be present on roads have lowered compared to when the study began. But there is no doubt that they are coming.

The Oslo study can contribute to uncovering the consequences of extreme scenarios and thereby navigating and influencing the decisions that are made today and that affect how the future transport system may turn out.

Megatrends are global, historical development features that are stable when seen over a longer period of time.

Literature agrees that there are three core megatrends in transport: 1) The technological development, including the digital, is taking place at a rapid pace. 2) Urbanisation unambiguously and quickly entails that more people move to the cities. 3) Man-made climate change is a reality.

These three megatrends form the basis for all base scenarios that are defined and calculated. 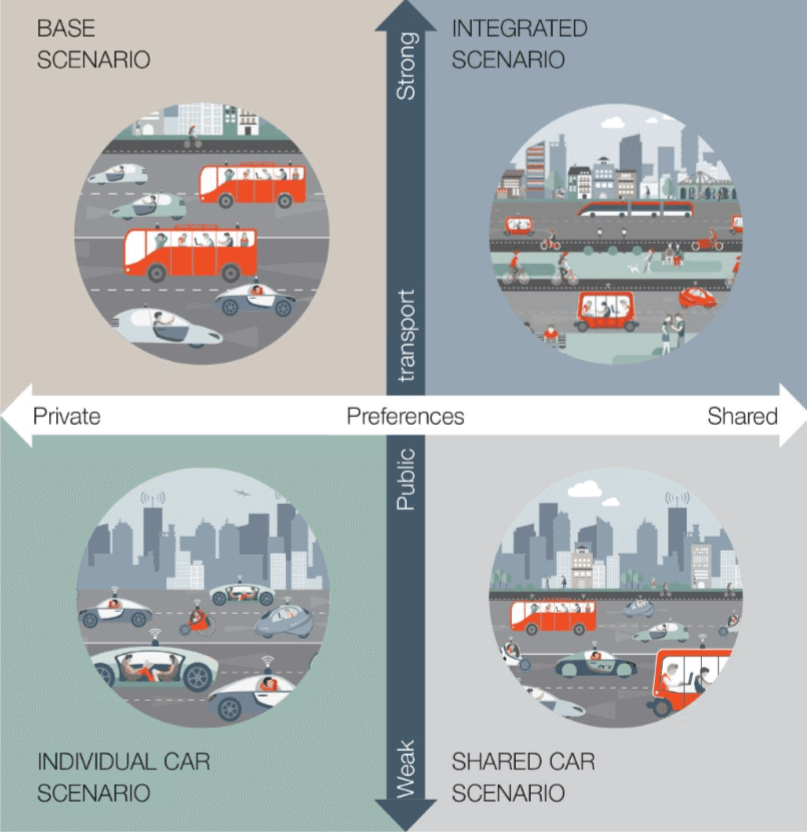 Figure 1: The four base scenarios in the Oslo study

The four simulated base scenarios have these characteristics in common:

Several assumptions are optimistic regarding the possibilities for optimising services. For instance, the notion that one shared MaaS platform is in place. It is not unlikely that a range of mobility providers will emerge, each offering a unique fleet of vehicles and MaaS platform.

A future with autonomous vehicles in a shared fleet entails the logistical challenge of picking up road users at the starting point for their trip and dropping them off at their destination.
That applies whether ride sharing is practised or not. The logistical challenge is consistent with the challenge known to the taxi trade, ambulance services and parcel delivery.

Booking trips in specific relations at specific times must be planned in an optimal manner that provides the best service level at the least costs.

This is not a job for traditional traffic models. Therefore, the Oslo study uses the tool MaaS Modeller, developed by PTV. Algorithms for MaaS Modeller originate in PTV’s work in logistics software and were adjusted and enhanced to handle the same flexibility in ride planning for passenger transport.

Compared to other studies of the same problem, the Oslo study is unique in that simulations of a specific trip demand are prepared for a specific big city region.

Simulations are carried out for more than 0.5 million trips for four hours around morning rush hour on a weekday. Through simulations, the fleet size and transport scope are optimised to ensure that all trips are serviced within the defined service level with the least amount of effort.

All scenarios achieve a considerable reduction in the amount of vehicles required to meet the transport need. The scenario where all car users use an on-demand system and practise ride-sharing results in a 93 per cent reduction of the car fleet.

The scenario where current users of buses and trams switch to using the new on-demand system and where ride-sharing is not practised results in an 86 per cent reduction of the car fleet.

This vast reduction of the need for parking areas will release areas that can be put to other uses, which will be especially relevant in urban spaces with high urban quality and quality of life.

Furthermore, parking garages and underground parking will be made superfluous, and road areas will be made available to the benefit of cyclists and pedestrians.

A brand new layout of terminals, traffic junctions and road sides will be needed, securing effective pick-up and drop-off of users of the new on-demand systems.

Not only must we rethink the practical and geometric layout; so must pricing of system use.

Revenue from parking fees will disappear, but the use of road sides must be priced. Traffic junctions will face an entirely new challenge: securing a layout that is easy to grasp, information, communication as well as management of the many pick-ups and drop-offs in small vehicles.

All the scenarios will have vast, perceptible consequences for road traffic. The most optimistic scenario, where public transit users remain in the public transit and car users practise ride sharing, achieves a reduction in vehicle kilometres of 14 per cent compared to today’s car traffic.

This reduction may quickly be devoured by growth caused by increased urbanisation and, in turn, larger derived traffic volumes than those forming the basis for the scenario calculations. See illustrations in figure 2 below. 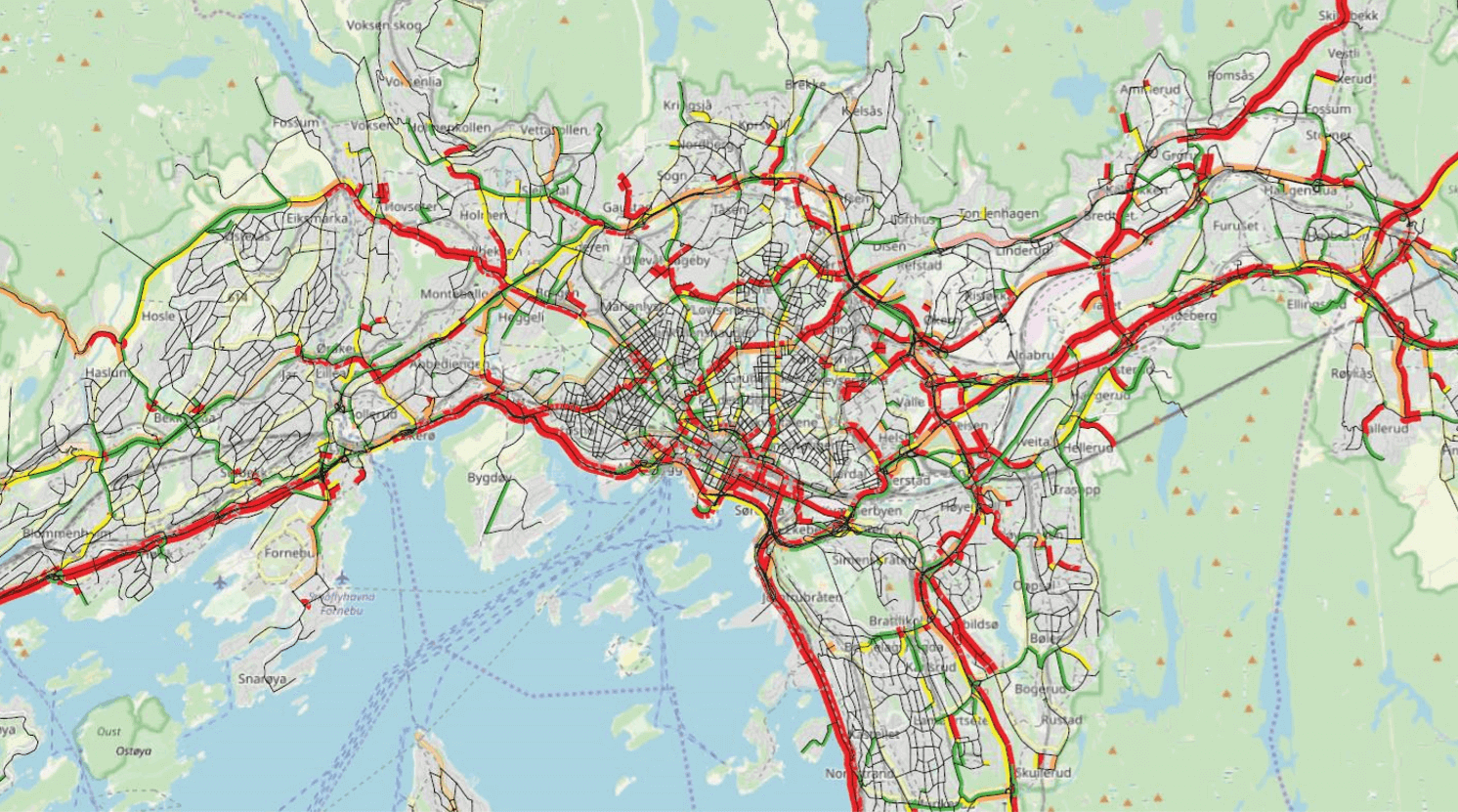 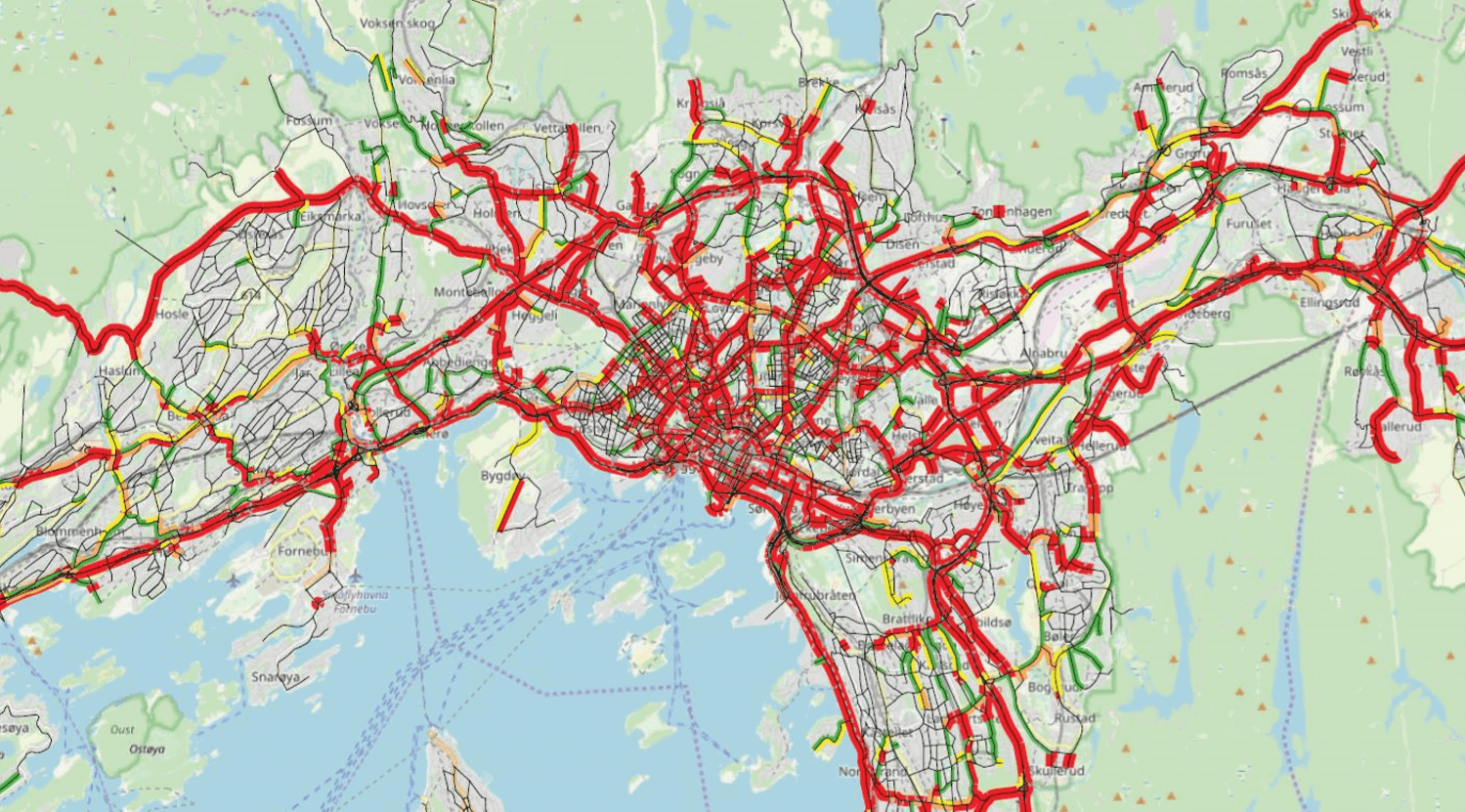 The scenario where both car users and public transit users (buses and trams) use an on-demand system without ride sharing results in a growth in transport volume of 97 per cent. In practice, such traffic level cannot be handled by the existing road system in the Oslo region.

As a new element, you will see empty cars travelling the streets. All scenarios entail a considerable amount of empty rides when users are to be picked up.

The traffic direction will be turned upside down. That presents a challenge in terms of what priorities to implement on roads and in intersections.

Simulations demonstrate a considerable increase in traffic going out of Oslo in the morning: Empty cars leaving to pick up commuters heading to workplaces in the central parts of Oslo.

The service level in the four scenarios include: door-to-door service; real-time booking; a maximum waiting time of ten minutes from booking to service; one-minute pick-up and drop-off stops; a detour factor of 1.5 measured in kilometre in case of ride sharing.

In addition, it is assumed that vehicles for individual transport can fit four persons to make room for small, private groups travelling together. Vehicles for ride sharing can fit six persons.

The advantages for current public transit users are obvious since they can reduce their travel time significantly. For car users, the opposite is true.

Especially the extra time spent waiting for a car to arrive will result in a longer travel time. The calculation does not include the time car users save by not having to find a parking space.

The Oslo study is among the first of its kind. The aim was to explore the consequences of extreme scenarios which will not take place for many years – if ever. It contributed the insight that it is vital to commit to sharing not just cars, but rides.

Furthermore, well-developed, user-friendly public transit plays a vital role if our road system is to be able to handle the future traffic volumes. The next step could be to explore other scenarios where autonomous vehicles support public transit.

This article was first published in the DK magasin Trafik & Veje, November 2019.

In recent years, I have been working on several project regarding new technologies, e.g. autonomous vehicles and Mobility-as-a-Service. The work has covered research, development and analysis of the expected impact and consequences of new technology and new transport solutions.

Interactions and interfaces between people, vehicles and infrastructure are much more than a technical discipline. Communication of complicated issues, from technicians to decision makers, is both important and exciting to work with.

I have been working with transportation planning for the last 30 years. And it has never been more exciting than now. The perspectives of autonomous vehicles, smart cities and digital solutions enable entirely new solutions. Potentially, it can be part of the responses to mobility - and climate challenges. It is motivating to contribute with knowledge in this process.

Railways Insights
Efficient data management paves the way for sustainable maintenance of railway assets – both econ...
Energy Insights
The floating wind forecast: mostly sunny with a chance of showers
Tunnels Insights
To understand the future of tunnels we must look to the past