THE ECONOMIC CASE FOR INVESTING IN STORM WATER MANAGEMENT

While many growing cities around the world have failed to identify the increasing risk of flooding, a few are taking action now and investing in sustainable storm water management infrastructure. One forward-looking city in particular is committing to their long-term growth aspirations with a new system capable of handling 6.5 million cubic metres of storm water.

The effects of climate change are all too real. Nations across the globe are struggling to find resilient solutions to unpredictable storm and flooding events caused by climate change.

Urbanisation is not helping the situation either. Not only does urban land cover act as a heat source which can intensify precipitation, but urban emissions produce aerosols that increase cloud condensation resulting in increased precipitation.

It also seems that in recent history, the problem has increased in intensity. In the US, the National Climate Assessment found that extreme rainfall events are becoming heavier and more frequent, especially over the past 30-50 years.

In megacities, where population growth and intense urbanisation are adding additional pressure on existing infrastructure and over capacity systems, a sudden and unexpected weather event can have devastating health, safety, social and economic impacts.

The Center for Neighborhood Technology's report on The Prevalence and Cost of Urban Flooding confirmed that the impacts from flooding due to heavy rainfall events are long lasting.

Chronically wet houses are linked to an increase in respiratory problems; insurance rates and deductibles may rise to compensate for repeated basement flooding claims; and wet basements can lower property values by 10-25 per cent.

The Federal Emergency Management Agency in the US also found that following a flooding disaster almost 40 per cent of small businesses never reopen their doors.

The wider economic impact is also significant. The US National Centers for Environmental Protection have calculated the average price tag of each severe storm event at $2.2 billion USD. But these costs are not unique to the US.

Making the investment for the next generation

Severe rainfall events due to climate change may only happen once every few decades but the damage can be substantial. Historically, local governments have tried to keep outdated and over capacity systems and infrastructure in service for longer than is reasonable.

However, many municipalities are finally coming around to the necessity of optimising their storm water management systems, as they begin to realise the long-term cost savings and economic benefits.

Let’s use Copenhagen as an example.

In the summer of 2011, the City of Copenhagen experienced an extreme 1,000-year rainfall event. During this particular storm, rainfall measured almost 100mm in just 60 minutes, resulting in an estimated 5-6 billion DKK in damages.

Following these events, the City identified the need for better planning and infrastructure to prevent another flooding incident. They invested in the Cloudburst Management Plan, which outlined a requirement for several giant, metro-sized tunnels excavated deep under the streets to direct storm water run-off into the Oresund Strait.

One of these, the COWI designed Svanemøllen Cloudburst Tunnel, is an 8km long, 1.8-3.2m wide underground bored tunnel, located at a depth of 15-20m below street level.

Only 3 years into Copenhagen's 20-year Plan, a number of wider economic benefits had already come to fruition. The 2015 Climate Change Adaptation and Investment Statement explained how that the programme was helping small and medium-sized enterprises receive a skills boost.

Additionally, these activities would provide a springboard for the development of innovative solutions that local companies could utilise on a growing global market, as they are applicable to other major modern cities who are struggling to cope with population growth demands and managing extreme volumes of water.

In fact, Copenhagen has already made formal agreements with both New York City and Beijing to exchange ideas and data from this initial climate adaptation programme.

Another major city investing in a programme of this nature is the Dubai Municipality. They have a vision to be smart and sustainable in their urban development and have identified an emerging area of growth near the Dubai World Central area, the Al Maktoum International Airport, and the EXPO2020 area.

To prepare for this future demand, they have initiated the Dubai Deep Tunnel Storm Water System (DTSWS) project, which is one of the most ambitious infrastructure projects undertaken by this government and will drain almost 40% of the entire urban area of Dubai.

As the Design Consultant for the PORR-SIX CONSTRUCT Joint Venture, COWI is responsible for the civil works, and the durability, MEP and hydraulic design on this important project.

The project of the century

Conceptually, the system is simple. Groundwater and rainfall are collected in a network of drains at street level and led to the deep tunnels by collector drains. The water is transferred to the pumping station and discharged at the outfall of the system located in the sea.

Technically, it is anything but straightforward. The sheer scale of this tunnel is remarkable. It is 10km long and has a uniquely large internal diameter of 10m, which is taller than a three-storey building.

Additionally the thickness of the tunnel lining compared to the diameter is one-of-a-kind, but this ratio makes it the most economical solution. 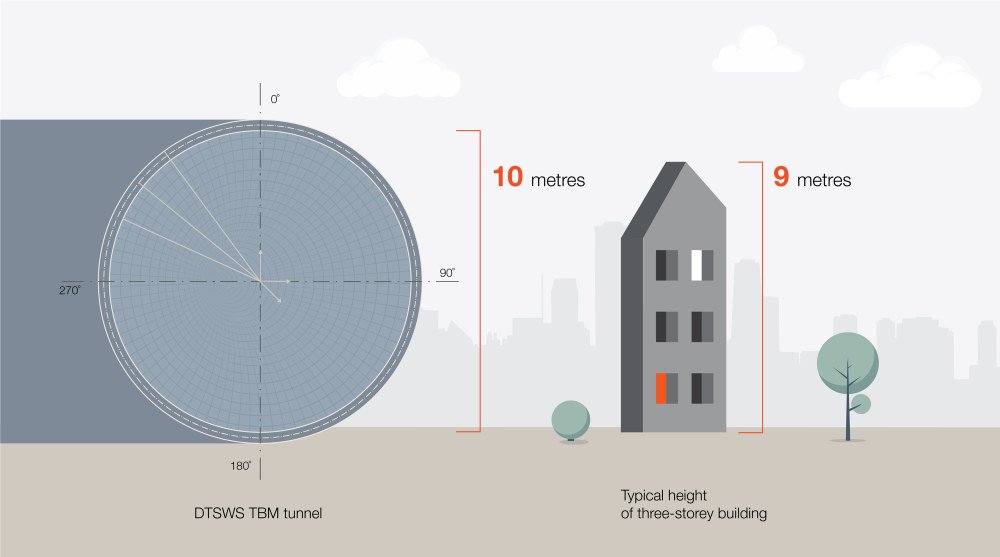 One particular challenge on the project is the client's requirement for a "maintenance free" 100-year service life. While durability and protection are always a high priority when it comes to underground infrastructure, it becomes even more critical on a tunnel of this magnitude.

Around the DTSWS, the storm water that flows through the tunnel contains very abrasive sand, which grinds the concrete from the inside.

On the outside of the tunnel, the surrounding groundwater contains aggressive chlorides and sulphates, causing chemical reactions that can slowly deteriorate the concrete.

By working in close collaboration with our team of concrete technology and hydraulic specialists, we are addressing this extra level of complexity by developing a number of sustainable and energy efficient solutions to meet the client's needs.

When the system opens in 2020, it will be capable of handling 6.5 million cubic metres of water, the equivalent of 2,600 Olympic-sized swimming pools, pumping at a rate that could fill one of these pools in just 1 minute.

This solution will help prevent extreme rainfall events in the future from causing unnecessary destruction and avoidable costs.

Along with other examples of modern cities investing in storm water management systems, we believe that this project in Dubai will demonstrate that with the right infrastructure in place, urban development goals can be met with environmentally and financially sustainable solutions.

As a project manager and chief tunnel engineering specialist, I have extensive experience working with consultants, contractors and clients across the whole spectrum of tunnel design projects.

Throughout my career, I have worked across various fields of geotechnical design and tunnel engineering. Prior to my work on DTSWS, I was working on the Abu Dhabi Strategic Tunnel Enhancement Programme (STEP) where our team helped contribute to the Abu Dhabi government's 2030 goals of equipping the city with sustainable infrastructure solutions for an increasing population.

What I really like about our job is seeing the structures you had on a tiny A3 print out on your desk - discussing and developing with your colleagues in a scale 1:100 or even smaller - suddenly becoming true in full scale.